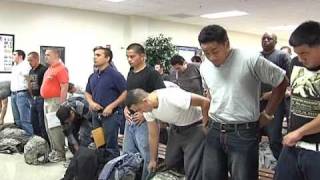 From youtube.com: US Army Basic Training, The Making of a Soldier PT 1, Reception Have you ever wondered what it's like to go through Basic Training today? So many improvements have been made recently to enhance the process of turning
(Image by YouTube, Channel: Fort Benning)   Details   DMCA

The US Army, perhaps in need of more 'boots on the sand', is revving up its ad campaigns. The latest television ad says it plain and clear: Warriors Wanted! And why not just appeal to the childlike, video game raised young men and women to join up? Then they can get away from having to work a dead end job, or spend years in college studying (at great expense by the way) for uncertain future employment. Now these low income young kids can serve their country by becoming occupiers of another Arab country that they themselves really don't understand why they are even IN!

This baby boomer cannot even conceive of how far my nation has regressed culturally. The celebration of violence is rampant! Who would have ever imagined the popularity of what they actually have the nerve to call a sport in Ultimate Fighting? If you have not yet watched one of these (so called) matches, please do; but first sit and watch the gladiator school scene from the 1960 film Spartacus. You will see, more or less, just what this newest form of ' Violence as Sport' has given us. So, the same young men (and some women) who grew up on violent video games and then graduated to UFC, make a great source for this new empire's army of warriors. I am not taking away from the super physical abilities of those who fight in those caged rings, taken right out of Spartacus. Just as with professional boxers and athletes from all sports, these folks are dedicated and train very hard. It is just that to celebrate violence is NOT what we humans are supposed to have evolved out of, and not back into.

When this writer played college football back in the 70s, there were but a few of my teammates who took 'uppers' and steroids for better performance. Nowadays, they have to continually drug test all athletes because of the preponderance of new and better forms of these enhancers. Research has also come out that, in the arena of US phony wars and occupations, the military has given out 'uppers' and who knows what else to our soldiers in the Middle East. It used to be, back in my day, that the rock and roll mantra of 'Let's go get stoned' meant smoking some marijuana and chilling out. Nowadays, it is to get perched like a falcon, ready to attack its prey. Sadly, many of those young men (and some women) who return home from those phony war zones in the desert, become our local police officers. Is that who you want to 'serve and protect' your community? Nice young men and women who join up, then get indoctrinated to see all A-Rabs as potential terrorists, get sent to places they never should have been sent to, do terrible killings and return home as 'damaged (psychological) goods'.

Let's send those men and women dressed in nice suits who run these phony wars to the hot desert's hornet's nest. Hand them the helmets and powerful killing instruments and let them act like the warriors that the commercials trumpet.

{Philip A Farruggio is the son and grandson of Brooklyn, NYC longshoremen. A graduate of Brooklyn College ( class of '74 with a BA in Speech & Theater), he is a free lance columnist posted on World News Trust, Nation of Change Blog, Op Ed (more...)
Related Topic(s): Age Baby Boomers 1946-64; Armed Forces; Athletes; Men; Military; Police; Sports; Violence; Wars; Women; (more...) Work, Add Tags  (less...)
Add to My Group(s)
Go To Commenting
The views expressed herein are the sole responsibility of the author and do not necessarily reflect those of this website or its editors.