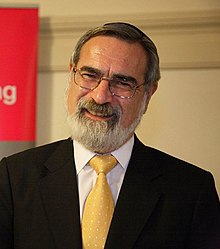 However, in terms of substance, it nicely complements Pope Francis' new 43,000-word visionary social encyclical on social friendship titled Fratelli Tutti, which the Vatican released on October 3, 2020 - and which I read just before I read Rabbi Sacks' new 2020 visionary book. The pope explicitly addresses his new social encyclical not only to practicing Catholics around the world, but also to persons of good will around the world - because he assumes that persons of good will are concerned about the common good, which Rabbi Sacks explicitly refers to in the subtitle of his new book (see esp. pages 120, 121, and 122). In general, Roman Catholic social teaching is concerned with the common good.

For the record, I do not think that President Donald ("Tweety") Trump is concerned about the common good. On the contrary, he represents what Rabbi Sacks refers to as populism (see the index of his book for specific page refers to populism).

(1) To Heal a Fractured World: The Ethics of Responsibility (New York: Schocken Books, 2005);

However, those three visionary books are comparatively sedate compared to Rabbi Sacks' new 2020 visionary book. (So are Pope Francis' 2015 and 2020 social encyclicals.)

Now, before I retired from teaching at the University of Minnesota Duluth (1987-2009), I regularly taught an introductory-level survey course on the Bible once a year. Consequently, I have been especially interested in the prolific Rabbi Sacks' books discussing the Hebrew Bible in his series of books on Covenant and Conversation, one of which is his 2016 book mentioned above. In any event, the ancient Hebrew idea of covenant serves as the springboard for the visionary orientation of Rabbi Sacks' new 2020 visionary book.

Related Topic(s): Bible; Catholic; Common Good; Culture; Ethics; God; Love; Pandemic; People; People; (more...) Politics; Populism; Rabbi; Responsibility; Trump; Work, Add Tags  (less...)
Add to My Group(s)
Go To Commenting
The views expressed herein are the sole responsibility of the author and do not necessarily reflect those of this website or its editors.