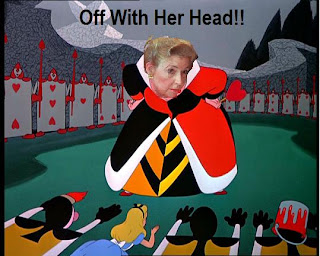 This story has "Righteous Assassination" written all over it!

Although her name's certainly not Alice, Francis Fox Piven  seems to have fallen down a rabbit hole and has found herself deep in  Right WingNutLand, with Phyllis Schlafley, the Queen of Draconian Hearts calling "Off with her head!!"

The frumious mess all started out with Glenn Beck (must it always start with him?). He started to link Ms. Piven to the nastiest things imaginable: social justice and the lot. He named so very many nasty things that Ms. Piven has gotten tons of ... death threats.

Seriously. Death threats. For which he steadfastly refuses to apologize for. And the threats can be quite easily be linked to him because they've always increased every time he's mentioned her on his program. They are a barometer of hate, if you will.

So who is Frances Fox Pivon and why do Glenn Beck and (by extension) Phyllis Schlafley want her off the planet?

Frances Fox Piven was born (1932) in Calgary, Alberta Canada of Russian immigrant parents who, when she was one year old, moved to the U.S. and became a naturalized citizen in 1952. She received her B.A. in city planning, her M.A. and Ph.D. all from the University of Chicago.

She married Richard Cloward and the two collaborated on a small article for The Nation  magazine in 1966. It was titled: "The Weight of the Poor: A Strategy to End Poverty" It advocated encouraging the country's poor to take full advantage of all welfare programs, in order to "weigh" the system down, thereby forcing reforms to the system and lead to a guaranteed annual income. Although the Nation was, at the time, a very small publication, the article gained ground in sociological circles and the strategy came to be known as the "Cloward-Piven strategy."

Her career as a sociologist and political scientist was highlighted by efforts such as founding Human SERVE (Service Employees Registration and Voter Education). And her writings on poverty (with Cloward) such as Regulating the Poor, Why Americans Don't Vote, and Challenging Authority: How Ordinary People Change America.

In 2006-07, she served as President of the American Sociological Association.

Her awards include: (from wikipedia)

When most people see Frances Fox Piven's curriculum vitae, they are astonished that they've never heard of her. Which may also be the reason Glenn Beck smells treachery and treason: Piven must be a kind of secretive socialist-anarchist. Look at her career and wards once more. Now think of what associations Beck has latched on to:

Russian immigrants (Commie-pinko Russkies!)
University of Chicago (a veritable hotbed of leftist - horrors! - intellectuals!)
An article in The Nation (incendiary, at the very least!)
A TIDES FOUNDATION award! (they love her leftist little heart!)
A EUGENE V. DEBS AWARD! (He was a SOCIALIST UNION ORGANIZER!!!)
(What a good thing patriot Beck discovered her when he did!)

Rev. Dan Vojir is has been writing/blogging on religion and politics for the better part of ten years. A former radio talk show host (Strictly Books " Talk America Radio Network) and book publisher, Dan has connected with some of the most (more...)
Related Topic(s): Frances Fox Piven; Glenn Beck; Phyllis Schlafly; Socialism, Add Tags
Add to My Group(s)
Go To Commenting
The views expressed herein are the sole responsibility of the author and do not necessarily reflect those of this website or its editors.