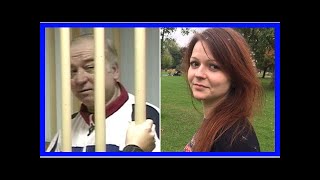 The British are well known for their dramatic flair when it comes to stories of Cold War espionage and murder mystery. Think Ian Fleming, John Le Carre' and Agatha Christie.

But this week's episode of a former Russian spy being poisoned on a public park bench in a quaint English town has suspiciously a tad too much drama about it.

It is being speculated that the Russian exile, who had been living in Britain since 2010, may have been poisoned with a deadly nerve agent. He is reportedly in hospital in a critical condition.

Within hours of 66-year-old Sergei Skripal being rushed to hospital in Salisbury, along with his adult daughter, British politicians and media were cranking up the story that the pair had fallen victim to a murder plot implicating the Kremlin.

British Prime Minister Theresa May held a top national security summit in Downing Street, and her Foreign Secretary Boris Johnson was telling the parliament on Tuesday that further sanctions would be imposed on Russia "if" Moscow was found to be involved in the apparent poisoning incident.

Johnson's use of the word "if" seemed to be irrelevant because he had already laid on the innuendo thick and fast to impugn Russia. "We don't know exactly what has taken place in Salisbury, but if it's as bad as it looks, it is another crime in the litany of crimes that we can lay at Russia's door," intoned Johnson with affected gravity and notable haste to implicate Moscow.

Moscow has dismissed the rampant speculation as "wild" allegations aimed at whipping up "anti-Russian sentiment" among the British public.

British media outlets then quickly moved on to report security sources as saying that Britain's counter-terrorism forces "are hunting a network of highly-trained assassins suspected of launching a nerve agent attack." The would-be assassins were also described as "state sponsored" and conjectured to have access to a "specialist laboratory."

It is being speculated that Sergei Skripal and his 33-year-old daughter, Yulia, were exposed to the deadly nerve toxin known as VX during an afternoon stroll through their adopted hometown of Salisbury on Sunday.

Skripal had been living in Britain for the past eight years where he had been exiled as part of a spy swap. The former GRU military intelligence colonel was found guilty of treason by Russia in 2006 after being exposed as a double agent for Britain's foreign intelligence service MI6. After serving four years in prison in Russia, the disgraced spy was handed over to Britain in a Cold War-style exchange.

What is being recklessly speculated in the British media is that the Kremlin ordered Skripal's assassination out of revenge for his past betrayal.

To drive home the innuendo, comparisons are being made to the death of another Russian secret service agent Alexander Litvinenko. He died in a London hospital in 2006 from suspected poisoning with radioactive polonium. Again, the British media and politicians engaged in tenuous allegations of Kremlin involvement in Litvinenko's death.

Related Topic(s): Chemical; Daughter; Exile; Kremlin; Litvinenko; Russian Propaganda; Sergei Skripal, Add Tags
Add to My Group(s)
Go To Commenting
The views expressed herein are the sole responsibility of the author and do not necessarily reflect those of this website or its editors.