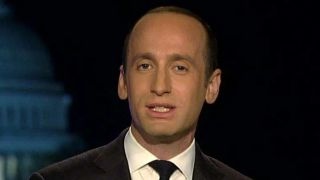 Republican Administrations seem to thrive on the Big Lie. For Ronald Reagan it was the lie that our own "government was the problem." For George W. Bush and Dick Cheney, the lie was that Iraq possessed terrible weapons that justified launching a costly and pointless war. For Donald Trump, the lie has been the supposed horrible "menace" of undocumented immigrants "invading" and threatening our country, poised to terrorize our homes.

All of these were baldfaced lies, made up out of whole cloth to hide the fact that these Republican Presidents and their Party really had nothing whatsoever to offer the American public except fear. Fear -- and tax cuts for the very wealthy.

It's bad enough that someone as disgustingly racist as Stephen Miller -- a person who has been excoriated and disowned even by members of his own family for his hateful, Nazi-like belief system; a person so despised he can't buy take-out food for fear someone will have spit in it before he eats it -- is the driving force responsible for the bogus anti-immigrant hysteria that has culminated in the shuttering of our taxpayer-funded government services for the past two weeks.

It's bad enough that a good chunk of the American population is ignorant enough to swallow this garbage, without being told who the main source of it all is.

But here we are in prime time, witnessing the apotheosis of this wholesale scam being perpetrated on the American people by Donald Trump and his white supremacist chief policy adviser, Stephen Miller.

CNN contributor April Ryan, a White House correspondent, said on Monday that her Republican sources had confirmed that Miller is writing the speech. Miller is known for his role in crafting the president's controversial travel ban on several majority-Muslim countries.

But Miller has done a lot more than "craft the travel ban." He is the chief architect of the Administration's "zero tolerance" policy and the impetus behind its child kidnapping scheme.

To Miller, immigrants are apparently "insurgents," and his cruel policies and corrosive rhetoric clearly reflect that disdain, from spearheading executive orders banning foreign nationals and refugees from Muslim countries, to orchestrating the ongoing family separation crisis at the border with his zero-tolerance policy, to his fervent support for President Trump's efforts to end birthright citizenship (a proposal he's been forcefully pursuing since early 2016).

As the New Yorker reports, despite his efforts to stay in the shadows, all paths regarding the administration's immigration policies, all offices within the executive branch involved in implementing those policies, ultimately report back back to Miller.

The meetings -- which, the official said, were first called by a team at the White House that reports directly to Stephen Miller, the President's senior adviser on policy -- include representatives from the Department of Justice, the Office of Management and Budget, the Department of Defense, and the Department of Homeland Security. The main focus, the official added, has been to "map out" how the government can detain asylum seekers as they wait for a hearing before an immigration judge, which can take several months: "The job is to model all the steps in the process. If we go after families, where do we detain them?

"Go after families" is a euphemism for tearing infants from their mothers arms at the border and then forgetting where either parent or child has been imprisoned. Miller's influence on this and all administration policies dealing with immigration is unquestionable.

So few opportunities do we get to witness Mr. Miller work directly. He pops in and out of the talk shows and slithers back under his white nationalist rock in the West Wing. But tonight we're apparently getting the venom almost (but not quite) directly from the snake's mouth. In a way, that's fitting, since, as noted in Vanity Fair, so few Americans realize who is behind all this.

Related Topic(s): Hate-Racism-Bigotry; Immigration; Speech; Stephen Miller; Trump Mexico Wall; Trump Speech; White Nationalist, Add Tags
Add to My Group(s)
Go To Commenting
The views expressed herein are the sole responsibility of the author and do not necessarily reflect those of this website or its editors.