They say they're non-violent. But the rally's organizer appears with a man facing charges for attacking anti-Trump protesters. 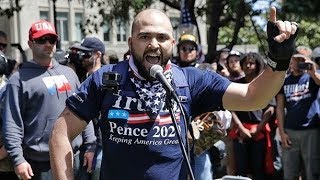 Starting at noon, they broadcast conflicting messages from their Facebook pages. First, they canceled a 2pm press conference at a well-known city park, slammed city officials for suppressing their speech, and said they would tell the media where they could secretly meet them later.

Hours later, despite all their pronouncements that they had nothing to do with white supremacists and that they eschewed violence, the lead organizer of Saturday's rally, Joey Gibson, was onscreen next to a notorious right-winger, Kyle Chapman. Chapman was charged with attacking counter-protesters with a bat at an anti-Trump rally in Berkeley in March.

The first live video showed a split screen with Patriot Prayer organizer Will Johnson, alternately saying he thinks he's being taken off the air by Facebook while rejecting accusations that he affiliates with white supremacists. In the other panel was Gabriel Silva, driving a van through what appeared to be the streets of San Francisco while passengers pointed out signs that said "Resist Hate" and laughing at them.

"We want to make sure that the truth gets out," Johnson rambled on. "The truth has to get out. They are calling a black person, a Mexican person and a Japanese person and a female white supremacists when it is completely a lie. And if anyone believes that they might want to get checked out."

Johnson and his right-wing brethren are either deeply uninformed individuals playing a dangerous game, or immature egomaniacs seeking to become right-wing celebrities by trying to taunt a city. Sadly, it appears these right-wingers are all naive, attention-seeking jerks. As the San Francisco Chronicle reported in an rolling updated blog, the city has been scurrying to deploy its entire police force on Saturday to defuse tensions as this cadre dangled its latest provocations and counter-protesters reacted.

The right-wingers scheduled and canceled a press conference at Alamo Square Park, a popular tourist vista, after the city put up fencing before dawn closing the park. They said they would later speak to the press in a "private" press conference from a location "not to be disclosed."

As the Chronicle noted, Patriot Prayer events have attracted many armed white supremacists similar to the marchers in Charlottesville. The paper reported that some white power symathizers showed up at Crissy Field, part of the Golden Gate National Recreation Area, where their planned rally had been canceled. (Johnson said they were anti-fascist activists in disguise.)

The Crissy Field organizers apparently chose that location because federal parkland is an open-carry zone, where guns can be displayed; in contrast to a city and state with strong gun control laws. When the National Park Service issued its permit for the event, it banned all guns, ammunition, sprays, and anything else that could used as be a weapon.

Meanwhile, before the Crissy Field rally was canceled Friday, San Francisco City Hall responded by organizing several dozen alternative events to promote peace and justice. The city also mobilized its entire police force to track and diffuse possible confrontations between the right-wingers and the counter-protesters. Hundreds of counter-protesters swamped city streets near Alamo Square, the Chronicle reported, and police urged them to go to a nearby plaza for a peace rally and concert.

As these actions unfolded on the streets, the Patriot Prayer organizers slammed local officials on Facebook, using a live feed to broadcast their comments (even as they accused Facebook of censoring them). In response, they received support from conservatives from across California and the country.

"So sad. Never thought I'd see the day when American patriots are deemed hate because they freaking love America. Sad. Keep strong and keep speaking truth," wrote one commenter.

"It doesn't matter, Will. That's the ONLY ammunition progressive liberals have to combat FACTS. They label dissenting opinions 'racist,' those who have them 'white supremacists,' and attempt to shut them down. Damn shame this is what our country has become," wrote another fan of the white supremacists.

Steven Rosenfeld  covers democracy issues for AlterNet. He is a longtime print and broadcast journalist and has reported for National Public Radio, Monitor Radio, Marketplace,  TomPaine.com  and many newspapers. (more...)
Related Topic(s): Chaos; Conservatives; Media Complicity; Media Manipulation; Protest; Violence; White Supremacy, Add Tags
Add to My Group(s)
Go To Commenting
The views expressed herein are the sole responsibility of the author and do not necessarily reflect those of this website or its editors.