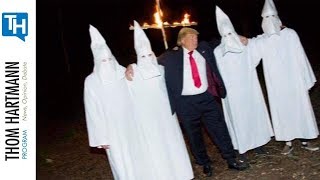 The slaughter of 20 persons in and around a Walmart in El Paso, Texas, by a virulent white nationalist on Saturday was not just a "mass shooting." It was a profound act of terrorism.

Nor was it the action of a single person. The alleged shooter was invested in Trump's talking points about a wall and had bought into the crazed conspiracy theory that wealthy Jewish entrepreneurs are bringing in immigrants to work cheaply and replace the white race. Hence his fulminating against the so-called "Hispanic invasion" and his praise of the shooter at New Zealand's Christchurch mosque (a shooter himself inspired by Trump).

It isn't enough to say that the El Paso terrorist was "hate-filled and racist," as El Paso police characterized him. That makes it sound personal and idiosyncratic. This man was part of a movement, a movement that is being actively promoted from the White House. The difference between a crime and terrorism is that a crime is for personal gain and its not ideological. This was ideological.

Does anyone have any doubt at all that if the person had been a Muslim with a similar manifesto, substituting Islamic themes and grievances for those of white nationalism, the national security state and the US media would be in overdrive blaming the world's 1.8 billion Muslims?

And yet white nationalists skate because their ideology seems less threatening to...white people.

It isn't less threatening. It is a national emergency. Research published at WaPo shows that in counties where Trump held rallies in 2016, hate crimes rocketed 226%.

Nationally, hate crimes are growing 9% a year, with Arab-Americans, Jews, and LGBTQ individuals seeing big spikes in hate crimes directed against them.

And, of course, the insistence of the Washington Establishment that we all be exposed to murderous violence by unbalanced persons wielding semi-automatic military-style weaponry allows such massacres to be carried out. But the toxic ideology of behind that insistence (and it has nothing at all to do with ordinary guns or hunting) is also deeply entangled in white supremacy.

It is, moreover, often said that there is no international dimension to white nationalist terrorism, so that it is classed as domestic.

But we know that Russian troll farms have promoted both the National Rifle Association and white nationalism. No, the problems don't all emanate from Moscow. But some of them do, and we should be frank about that.

Senate majority leader Mitch McConnell is angry about being called Moscow Mitch. But his ex-aides lobbied for a big investment in his state by a formerly blacklisted Russian oligarch, and then he blocked legislation to make US elections safer from Russian interference. A Russian spy attempting to use the NRA to influence the Republican Party has actually been convicted.

US Conservatives are responsible for the toxic mix of white supremacy and 300 million guns (most of them in the hands of 3 percent of the population). But there are powerful international forces attempting to reinforce these policies in order to divide and weaken America.

As for Trump's culpability, I wrote last March:

Related Topic(s): Donald Trump Supporters; Murder; Race; Shooting; Terrorism; White Nationalism; White Supremacist, Add Tags
Add to My Group(s)
Go To Commenting
The views expressed herein are the sole responsibility of the author and do not necessarily reflect those of this website or its editors.