On Friday, March 29, the main building of the Highlander Research and Education Center in New Market, Tennessee, was burned down in an arson fire. The center describes itself as a "catalyst for grassroots organizing and movement building in Appalachia and the South" that works "with people fighting for justice, equality and sustainability." After the fire, the center said in a news release that they "found a symbol connected to the white-power movement spray-painted on the parking lot connected to the main office." It appears the fascist white-supremacist symbol was put there by the perpetrators of the arson. 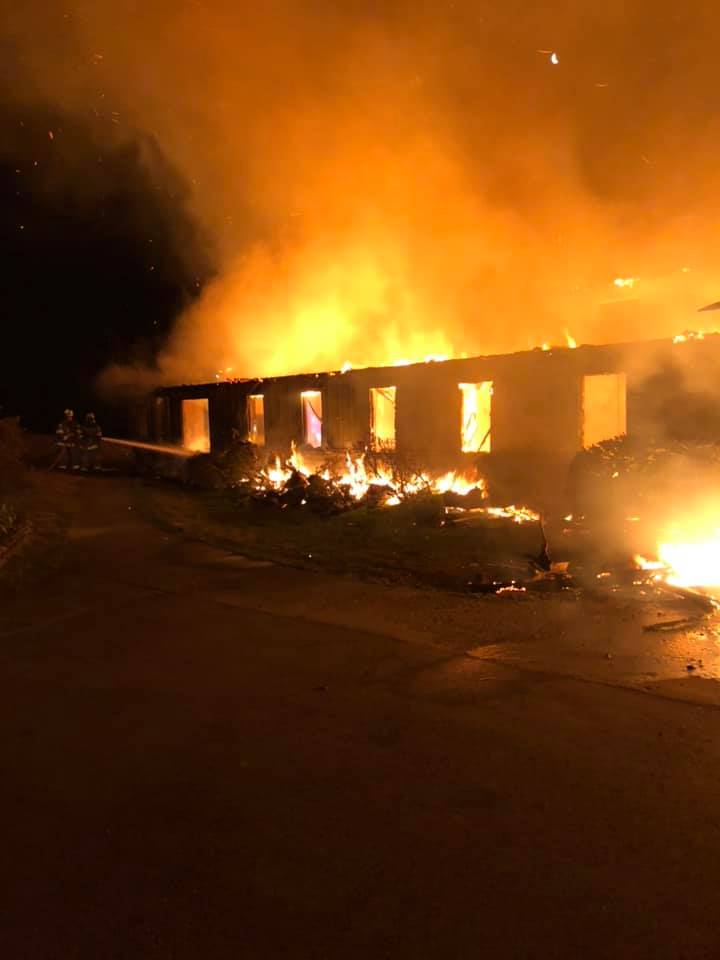 No one was killed or hurt in the Highlander arson, but the center said the fire destroyed "decades of historic documents, speeches, artifacts and memorabilia from movements of all kinds, including the civil-rights movement." The center has a long connection with the civil-rights movement, including training Rosa Parks before she refused to give up her seat on a segregated bus, sparking the 1955 Montgomery bus boycott that brought the fight against Jim Crow into national focus.

The sign found spray-painted on the center's premises was a symbol that looks like a hashtag with three vertical and three horizontal lines, which was first used by the Iron Guard, a fascist movement in Romania in the 1930s and '40s. More recently, this symbol has been used by some fascist "white power" forces in various parts of the world. Notably, the internet-white-supremacist fascist who invaded two mosques in New Zealand this March and murdered 50 people--livestreaming it on Facebook with the aim of inciting other fascists and racists--had the same symbol painted on one of the guns he used in the massacre. The Iron Guard symbol has also been used by fascists in the U.S., including some involved in the 2017 "Unite the Right" march of neo-Nazi white supremacists in Charlottesville, Virginia, in which protester Heather Heyer was murdered by one of the fascists--and after which Trump said there were "very fine people" among the fascist-KKK goons.

This attack in Tennessee--and other attacks on black and other oppressed people, immigrants, Muslims, Jews, and women--are happening in the context of undisguised white supremacy coming from the highest levels of the U.S. ruling class. There is a president in the White House now who said after the mass murders at the mosques in New Zealand, when asked if if he thinks that "white nationalism" (that is, white- supremacist fascism) is a significant problem, said, "I don't really"; who paints all immigrants as "criminals"; and who attacks protesters against Confederate monuments for "trying to take away our heritage." This is whipping up an intensifying fascist, racist wave in the South and elsewhere around the country.1

For decades, there has been a growing fascist section in this country, including at top levels of power. To them, America was "great" when it was unmistakably white, Christian, and male-dominated, and the USA had unrivaled dominance over the world--but it's gone to hell since. They find even the partial concessions that black and other oppressed people won in recent decades to be intolerable, and this hatred-along with the same hatred directed at gains won by women and blatant "USA #1" madness--is a big part of what fuels this fascist movement.

The Republican Party is the main vehicle of this fascism. But the Democratic opponents of Trump have no real answers either. In fact they, too, support white supremacy, in a less blatant form. Just look at how Bill Clinton opened his run for presidency by making a special trip to witness the execution of a brain-damaged black prisoner and then posing in front of a chain gang of black prisoners at Stone Mountain, Georgia (a monument to the Confederacy), as a signal to racist whites that he would keep black people in their "place"--and then, as a major part of his presidency, oversaw and pushed through repressive laws and policies that greatly expanded mass incarceration, particularly of black and other oppressed people.2 Or look at how Obama constantly put the blame for the whole oppressive situation blacks and Latinos face on the people themselves, preaching that the problem was youths with saggy pants, "absentee fathers," and so on--and how he attacked youths who rose up in Baltimore against the police murder of Freddie Gray as "thugs," while his In-justice Department never prosecuted a single murdering pig.3 The Democratic Party must uphold this white supremacy because the system they uphold and serve--capitalism-imperialism--has had white supremacy so tightly interwoven into its every fiber that you cannot get rid of the one without totally uprooting the other.

The arson of the Highlander Center and other incidents involving fascist white supremacists are the crest of what is objectively shaping up in society. On one side are those like the NRA and various other neo-Nazi, KKK-type groups openly threatening civil war against anything positive in society--while at the very top, Trump openly agitates for violence by his fascist followers and minions (like exhorting his crowds to chant "Lock Them Up!"), and moves to ratchet up repression by the state against immigrants and others. On the other side are the Democrat leaders trying to corral the opposition into "acceptable channels," even as they are one of the targets of the fascist forces.

Whether people are now cowed by or instead stand up to these fascist white-supremacist attacks--and how this struggle is fought politically--has urgent implications for where the world is headed. There are real stakes in countering the storm troopers, and their leaders and representatives, in every sphere in society, doing so as part of a broader movement to drive out the fascist regime--and, in terms of the future of humanity, as part of advancing the 3 Prepares: Prepare the Ground, Prepare the People, and Prepare the Vanguard--Get Ready for the Time When Millions Can Be Led to Go for Revolution, All-Out, With a Real Chance to Win.

2. For more on the crimes against the people by Clinton and other Democrats, see "The Most Recent Heinous Crimes Carried Out by Democratic Presidents or Congress: A Chart."

3. For more, see "Nostalgic for the Obama Years? Find Out How Much Harm Barack and Michelle Actually Did to Black People and Think Again."

Related Topic(s): Fascism; Fascist; White Supremacy, Add Tags
Add to My Group(s)
Go To Commenting
The views expressed herein are the sole responsibility of the author and do not necessarily reflect those of this website or its editors.