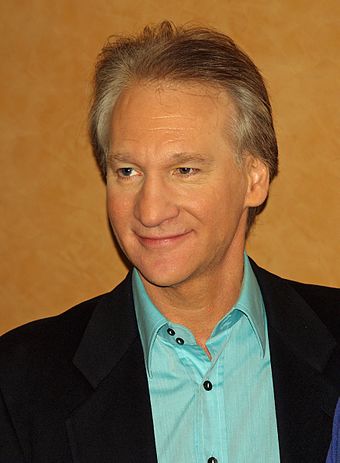 Bill Maher likes to describe himself as a liberal Democrat. And sure, when he announced that he was donating $1 million to the Obama campaign, that probably helped. But as a white man obsessed with accusing Democrats of practicing "identity politics," he's doing the party, and liberals, no favors.

Some of his more outrageous outbursts, in his quest to purge Democrats of any mention of power differences based on identity include:

* His challenging of Julian Castro's concerns with immigration, as being too close to his own identity, "'saying it was like if former President Barack Obama had first come out by campaigning on reparations or affirmative action.'" (What are the issues you're too close to, Bill?)

* His interview with Stormy Daniels, where she repeated her claim, that her decision to have sex with Donald Trump - even though she didn't want to - was not harassment or victimization. Maher's reply: "that more feminism" than the #MeToo movement. But some point out that it was actually a classic case of sexual harassment, as Trump was dangling the possibility of a role on his reality TV show (an offer which disappeared when she declined to have sex with him again.)

But perhaps the saddest aspect of the encounter was the fact that Daniels relied on age old rape culture "rules" to decide that she had no choice to submit to him, as she was alone with him in a hotel room. The fact that Maher thinks that "real feminism" means submitting to rape culture, attests to his warped view of feminism.

* He asked Zerlina Maxwell to defend the booing of Bernie Sanders at the "She The People" forum. Thankfully, Maxwell called B.S. on Maher's obsession, by pointing out that "identity politics" is simply civil rights.

The funny thing about the charge of identity politics, is that it goes without saying that white men can't be practicing it. They don't need to, of course. When they look to most of the decision makers in our government, they see themselves. When they study history, they hear about themselves. They don't feel compelled to have sex with people they are alone with. They don't have to risk their lives in order to exert sovereignty over their own bodies. They never have to be defensive about advocating for people they empathize with, because it is accepted that white men are just "regular people." Thus, the latest refrain among the ever expanding field of Democratic presidential hopefuls, is that we need someone who can resonate in the "heartland," among "rural voters." It goes without saying, that women and people of color don't fit the bill. A recent Vox article notes that "electability" is often a code word for white and male.

Ta-Nehisi Coates made this point most eloquently, in his brilliant article, "The First White President."