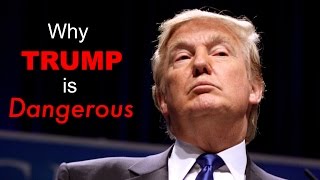 Having already violated every tenet of international law in its proxy jihadist war against Syria, including the seizure of one-third of the country, the United States invoked a Non-Law -- a Law That Never Was -- to justify its missile strikes against fictitious "chemical warfare" facilities. Syrian President Assad "kills his own people," said Trump, leader of the nation whose police kill more of its "own people" than any country except (fellow white settler state) Brazil, and whose prisons entomb one-quarter of all the world's inmates. (One out of every eight prisoners on the planet is an African American.)

On the Saturday morning after the bombs fell in Damascus and Homs, Omalii Yeshitela, chairman of the Black Is Back Coalition for Social Justice, Peace and Reparations, held a press conference in St. Louis to denounce Washington's aggression. "If you can use that justification," said Yeshitela, "that, somehow, the Syrian state is attacking its own people and, therefore, the U.S. can rain missiles, along with France and England, on Syria, then what would prevent Russia from attacking the United States because of all the people that the United States is killing in our communities, all of the starvation that is imposed on our communities, the fact that more than a million Africans are lumped up in prison?"

In his post-strike statement, President Trump called chemical weapons "uniquely dangerous" -- as if such uniqueness provided legal justification for Washington's act of war. But the United States has been poisoning "its own" Black people for generations. "They talk about chemical warfare, but books have even been written about how crack cocaine was introduced into the community through the CIA -- the same CIA that's involved in murdering people in Syria and other places around the world," said Yeshitela.

The United States began in smallpox-infected blankets and mountains of Native American scalps-for-bounty, and remains true to its genocidal imperatives. "We live in a country today where people are living in concentration camps that are euphemistically referred to as Indian reservations. What is it that would keep another country from attacking the United States based on that?" asked Yeshitela.

The fading empire refuses to accept the humiliation of defeat of its jihadist proxies, the head-cutters Washington and Saudi Arabia have nurtured as a foreign terror legion since deploying them against a leftist government in Afghanistan and its Soviet ally almost 40 years ago.

The billions in cash and arms that flowed into jihadist structures in Syria and Iraq since 2011 equipped and financed an al Qaida army (al Nusra) mighty enough to absorb and dominate a menagerie of other murderous Islamic factions, and to finally birth ISIS, the death cult caliphate. But the Syrian Arab Army, with the help of Russia, Iran, and its Shia neighbors in Lebanon and Iraq, is now on the cusp of retaking the bulk of its national territory -- except for the vital region of its oil fields, upon which the U.S. military sits like flies on sh*t.

Aside from the remaining head-hunters, Washington's only indigenous ally in Syria is an army of Marxist Kurds who were among the prime victims -- and fiercest resisters -- of the American-sponsored jihadist onslaught. For years they were tacit allies of Syria's government -- whose secularism they share -- in the struggle against the U.S.-sponsored barbarians. But Don Uncle Sam made them an offer of protection-or-else that they believed could not be refused, and the Kurds are now pawns -- as is the whole planet, in a sense -- to Washington's quandary: How does the world's sole Superpower remain in a region where it is despised, after its proxy forces have been defeated? And if it cannot remain, is it any longer The Superpower?

Washington is answering this imperial existential question the only way it can, with its awesome war machine, oiled by lies that no one believes outside the western corporate information bubble. There was no chemical attack by Syria, this month or last April or in August of 2013. All lies, but derivative of the much bigger lies that sought to justify the U.S.-Saudi-Turkish-French-British (and, of course, Israeli) war against, first Libya, and all but simultaneously, Syria: that these were civil wars, rather than naked imperial aggression.

"How does the world's sole Superpower remain in a region where it is despised, after its proxy forces have been defeated?"

Huge lies require powerful megaphones to mold the minds of the host country population, the only people that can (theoretically) shut down the U.S war machine without firing a shot. The Iraq war so repulsed the U.S. public, it became politically impossible for George Bush to "stay the course," or for Pentagon planners to contemplate another large scale American invasion of the region. The only alternative was an enormously beefed-up al Qaeda to wage holy terror wars that the corporate media would dutifully "report" as civil wars of an "Arab Spring."

Most white Americans bought into the lie because they wanted to: imperial-mindedness is white privilege on a global scale. Blacks have historically opposed U.S. militarism, but they acquiesced to Obama's aggressions and neutered their own peace politics because they wanted to -- in deference to the Black family in the White House.

But Obama-Time is over; the spell is broken. Donald Trump is the sum of all Black fears and loathings, an arch racist who is perceived as rendering the entire planet unsafe for people of color. Blacks are primed to oppose all of his policies, foreign and domestic. Black people are the only U.S. group that shares the general global distrust of U.S. foreign policy motives. Moreover, Black America is inherently skeptical of U.S. power structures, because Power in the U.S. has always lied about Black people -- and about people of color elsewhere in the world.

As Omali Yeshitela said of Trump's "flimsy excuse" for bombing Syria: "It's all fabrication, and we have been victims of such fabrications for 400 years in this country."

Related Topic(s): Assad; Donald Trump Lies; Lies Republican; Pentagon; Privilege; White Male Effect, Add Tags
Add to My Group(s)
Go To Commenting
The views expressed herein are the sole responsibility of the author and do not necessarily reflect those of this website or its editors.