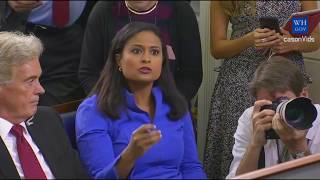 In other words, Trump dismissed DACA and has no interest in seeing the DREAM Act or anything similar on his desk. So long as Trump is in office, Dreamers are going to be deported.

When questioned over the idea that Congress would be able to reach agreement on a comprehensive immigration bill before March 5, Huckabee Sanders was dismissive. She stated that Americans didn't elect Congress to "do things that were easy" and repeatedly said that should Congress not be able to deal with the issue, they should "get out of the way."

"Congress's job to legislate. If they can't, they should get out of the way and let someone else take their place that can get things done."

Similar statements were made at least four times, as the Trump White House worked to blame everyone but Trump for his action against the children of immigrants. Huckabee Sanders also painted President Obama's characterization of DACA as a "stop gap" measure as a clear indication that he knew it was illegal. The terms "illegal" and "unconstitutional" were used in almost every response, as part of the effort to show that Trump had no choice but to act.

In fact, Huckabee Sanders went so far as to call Trump's actions "compassionate" because the announcement doesn't kick Dreamers out immediately. She indicated that Trump could have kicked out Dreamers immediately, and should be given credit for protecting Dreamers.

She also made repeated efforts to tie the DACA program to unemployment among Americans in their 20s, including making repeated statements that 4 million young Americans are unemployed, including 950,000 African Americans, who Huckabee Sanders attempted to set against Dreamers under the pretense that Dreamers were stealing their jobs.

As with the statements made earlier in the day by Sessions, Huckabee Sanders attempted to paint the presence of Dreamers as something that affected employment and safety. In particular, she called out unemployment among African Americans and Hispanics in an effort to pit minorities against DACA. She redefined Trump's "compassion" to say he was compassionate toward these 4 million out of work Americans somehow affected by 800,000 Dreamers. Obviously, Dreamers must be America's hardest working group since they're holding down five jobs each.

Asked if Trump would sign a bill similar to DACA if it reached his desk, Huckabee Sanders pushed such an idea away, saying Trump would only sign a comprehensive bill, and she scoffed at the idea that it would be difficult for Congress to design and draft such a bill in time.

The repeated statements that Congress should "get out of the way" and a deadline of March 2018 certainly made it appear that Trump was not just attacking Dreamers, but also Congress by creating a situation that seems designed for conflict and failure.

Trump's decision was not a legal decision. Any deadlines that existed were deadlines that Trump could have easily moved or extended if he wanted. The Trump White House could have defended DACA if it wanted. But despite Trump's many claims to a "heart," his actions were brutally cruel.

Related Topic(s): Children; Cruelty; Daca; Immigration; Obama; Trump Insults, Add Tags
Add to My Group(s)
Go To Commenting
The views expressed herein are the sole responsibility of the author and do not necessarily reflect those of this website or its editors.