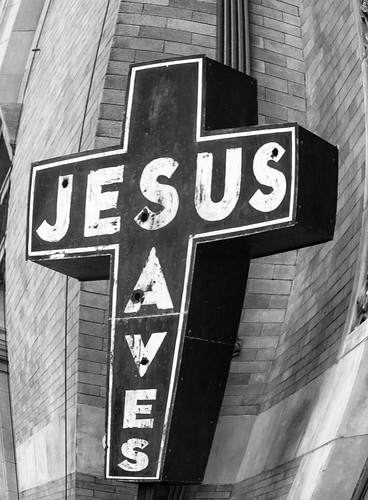 Jesus Saves
(Image by Me in ME)   Details   DMCA

Jesus was a liberal. He sided with underdogs. He championed little people, not the privileged and powerful. "Blessed are the poor" was one of his maxims. He told a noble: "Sell all that thou hast, and distribute unto the poor."

Christ's teachings were virtually a prescription for the compassionate "safety net" upholding people and families in modern democracies.

He also said: "When thou makest a feast, call the poor, the maimed, the lame, the blind: and thou shalt be blessed, for they cannot recompense thee."

His parable of the Good Samaritan spotlighted the nobility of caring for victims of misfortune. Christ's Golden Rule -- "All things whatsoever ye would that men should do to you, do ye even so to them" -- underscored common fairness.

Jesus didn't support harsh punishments. When the law demanded stoning of an adultress, he famously said: "He that is without sin among you, let him first cast a stone at her."

Jesus wasn't a militarist. "Blessed are the peacemakers" was another of his maxims.

Clearly, without question, Jesus espoused values aligned with the modern political left. Sometimes, this facet of religion is called the "social gospel."

So it's strange that America's white evangelicals and fundamentalists are the bedrock of the Republican Party -- a party that favors the rich, undercuts the safety net, backs militarism, and demands harsher justice and the death penalty. Oddly, these conservative believers contradict the values of Jesus.

When George W. Bush was governor of Texas, he signed execution warrants for a record-breaking 135 inmates, including 11 who were juveniles at the time of the crimes. Many cases involved questionable evidence. Yet Bush was renowned as a born-again believer and declared on national television that his favorite philosopher was Jesus. The contrast between the two sets off clanging bells of cognitive dissonance.

Related Topic(s): Democrats; Evangelical; Jesus; Republican; Trump; Underdog, Add Tags
Add to My Group(s)
Go To Commenting
The views expressed herein are the sole responsibility of the author and do not necessarily reflect those of this website or its editors.