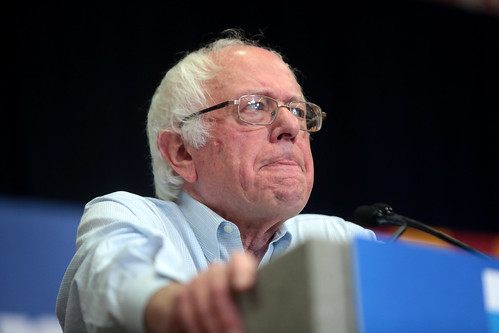 In California, Oregon and Washington, in the midst of an unprecedented heat wave, wildfires are raging out of control. Millions of acres have been burned, dozens of people have died, hundreds of homes have been destroyed, hundreds of thousands of people are being evacuated from their communities and the smoke-filled air in the region is increasingly dangerous to breathe.

When we talk about the existential threat of climate change, this is what we are talking about. And, unless we have the courage to take on the greed, lies and irresponsibility of the fossil fuel industry and transform our energy system into energy efficiency and sustainable energy, the worst is yet to come.

Let me be very clear:

We do not have any time to waste in addressing the climate emergency facing our country and the world. According to the scientific community, we have only a few years to act before there will be irreparable damage.

And yet with all the harmful effects of climate change that we are experiencing across this country and around the world, we have a president who believes climate change is a hoax. Trump is not only ignoring climate science, he is making a terrible situation worse by promoting the use of more fossil fuels.

While the Arctic is on fire, the Trump administration thought it might be a good idea to authorize oil drilling in the Arctic National Wildlife Refuge. We are in the middle of a very serious climate emergency and Trump wants to expand drilling efforts on protected lands.

In addition to the fires raging in the west, Hurricane Laura struck the Gulf Coast just a few weeks ago and was one of the most powerful storms to ever hit the United States. And last month in the Midwest there was a derecho with intense winds that swept through Nebraska, Iowa, Illinois, and Indiana, resulting in horrific damage to homes, infrastructure, and crops.

Plus, over the course of this year, our planet has experienced rising temperatures that threaten to destroy fragile ecosystems. January 2020 was the hottest January of all time, and the same happened in May of this year. And July 2020 became the second-hottest month ever recorded.

Here is a radical idea:

In the midst of this unprecedented climate emergency, we need an unprecedented response. We need a Green New Deal to take aggressive action on climate change and create millions of jobs in the process.

That is why, first and foremost, we must come together to defeat Donald Trump in November. And then we must end the disgrace of the fossil fuel industry destroying the planet to make a profit, and transition to 100% renewable energy.

Over these next couple of months, I am going to be working hard to mobilize our movement ahead of this election and help generate the largest voter turnout this country has ever seen. Because the truth is that we must not only defeat Donald Trump we must beat him badly.

But we can't stop there.

Related Topic(s): Arctic Drilling; Firefight; Future; Green; Science, Add Tags
Add to My Group(s)
Go To Commenting
The views expressed herein are the sole responsibility of the author and do not necessarily reflect those of this website or its editors.