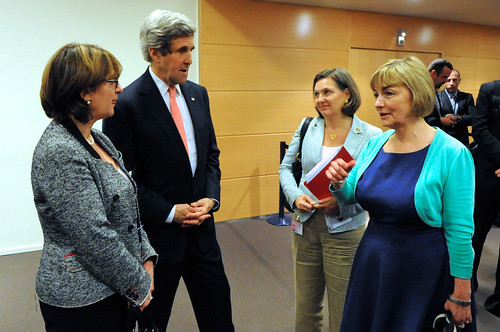 Describing it as "one of the darkest days in American history," President-elect Joe Biden denounced Wednesday's spectacular assault on the Capitol Building in Washington, D.C. as a coup attempt fomented by Donald Trump.

The last four years we've had a president who's made his contempt for our democracy, our Constitution, the rule of law, clear in everything he has done. He unleashed an all-out assault on the institutions of our democracy from the outset, and yesterday was but a culmination " of that attack."

"This is not dissent, it's disorder. It's chaos," he added, calling the events an "unprecedented assault" on the very fabric of U.S. democracy.

Yet, almost at the same time as the future president was denouncing Trump's coup attempt, he was appointing Victoria Nuland the driving force behind the 2014 insurrection that overthrew the Ukrainian government of Viktor Yanukovych as his new Under Secretary for Political Affairs.

The United States and NATO had been making overtures to Ukraine for some time before the coup, hoping that the country would become the latest post-Soviet state to fall into their fold as they continued to expand eastwards. Yanukovych, however, was in favor of steering Ukraine in a more Russia-friendly direction. The decision spurred demonstrations across the country from pro-E.U. forces. The Obama administration immediately sensed an opportunity, sending Nuland across the world to lead and support the movement, the senior diplomat rallying protestors, and was even photographed handing out cookies in the streets.

While in the West, the revolt was presented as being led by tech-savvy, forward-thinking students. In reality, most of the muscle was supplied by neo-Nazi militias who helped force through Yanukovych's downfall and continue to hold an oversized role in Ukrainian politics and society. In December, the United States and Ukraine were the only two nations to vote against a United Nations measure (passed 130-2), "combating glorification of Nazism, neo-Nazism and other practices that contribute to fueling contemporary forms of racism, racial discrimination, xenophobia, and related intolerance." This was done as they felt the resolution could be used to target the Ukrainian government and the U.S.' continued funding of it. Leaked phone calls show that Nuland and American Ambassador to Ukraine Geoffrey Pyatt had long conversations about who should make up the post-coup government.

Edward Snowden has warned that decisions by Twitter and Facebook to ban Donald Trump sets a dangerous precedent for free speech online. ["This Will Be Remembered as a Turning Point": Snowden Warns Against Trump Social Media Ban]

The events of early 2014 spooked Russia so badly that it flew troops into Crimea to annex the territory. The affair led to increasing tensions between the U.S., Ukraine, and Russia, and almost led to a hot war between the two nuclear-armed countries. In the end, President Obama refused to escalate tensions to that point, angering many in Washington.

Among them, seemingly, was Nuland, who promises to again be a Russia Hawk. As Politico wrote this week, she has been an "outspoken critic of President Donald Trump's foreign policy particularly his appeasement of Russian President Vladimir Putin." In reality, however, Trump was extremely bellicose with Moscow, sanctioning the country, bombing a Russian base in Syria, and letting a number of anti-nuclear treaties expire, much to the Kremlin's consternation.

Related Topic(s): Appointees; Biden Harris; Ukraine; Victoria Nuland, Add Tags
Add to My Group(s)
Go To Commenting
The views expressed herein are the sole responsibility of the author and do not necessarily reflect those of this website or its editors.