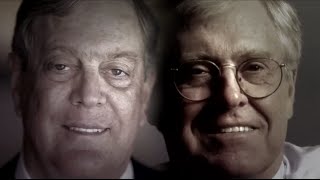 Multi-billionaires Charles and David Koch want nothing less than to supplant America's core democratic principle of majority rule -- the will of The People -- with their core plutocratic principle of inviolable property rights, also known as domination by the wealthy minority. Their notion is that "property" (accumulated wealth and the means to get it) is sacrosanct and cannot be restricted by the pesky majority for the Common Good. Cloaking their efforts with layers of dark-money front groups, the Koch brothers have used their enormous assets to mount a far-ranging, ultra-sophisticated assault on American democracy.

From their early involvement in The John Birch Society (daddy Fred Koch being an early member), they continued their rightward march, and by the 1970s, both had plunged into the abyss of a laissez-fairyland plutocracy. With the fervor of religious cultists, they've devoted themselves to the cause of "liberty" -- by which they mean the government's only proper role is keeping the avaricious pursuits of the wealthy owner class free from any interference by you, me and the democratic "us." They believe that We The People can neither tax the riches of the owner class nor set rules on how it treats workers, consumers, nature ... and society as a whole.

Even more shocking than their arrogance is just how far they've come and are willing to go with this scheme. For nearly 40 years, they and their uber-rich allies have been battering the legal structures and mechanisms that give ordinary people some chance to control their own destinies. Among the brothers' goals are the following:

--Kill all restrictions on political spending by corporations and the rich.

--Suppress the voting rights of students, people of color, the elderly and others who tend to oppose Republican policies and candidates.

--Eliminate the right of consumers, workers and others to sue corporations, forcing them instead into corporate-controlled arbitration.

--Ax regulations that protect people and our environment from corporate abuse.

--"Preempt" the right of local people to pass laws that corporations oppose.

The effect of these and hundreds of other national, state and local attacks is that the wealthy few are now grabbing evermore societal wealth and power, shattering America's commitment to the Common Good. It adds up to a coup -- and yet, because it has been built slowly and with deliberate stealth over decades, the public has not yet fully grasped the enormity, complexity and effectiveness of this unprecedented conspiracy of billionaires.

Related Topic(s): Billionaires; Corporate Greed; Koch Brothers; Money; Politics, Add Tags
Add to My Group(s)
Go To Commenting
The views expressed herein are the sole responsibility of the author and do not necessarily reflect those of this website or its editors.