With less than week until deadline to reunite all families, reports of abusive treatment and Trump administration incompetence continue to emerge 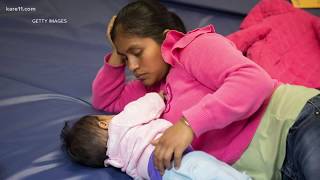 With less than a week to go until the Trump administration's court-ordered deadline for reuniting all families separated at the U.S.-Mexico border, the vast majority of families remain apart, according to government officials.

Just 364 families out of about 2,500 have been reunited under President Donald Trump's "zero tolerance" immigration policy, with children as young as five still in detention centers across the country while their parents are incarcerated for the misdemeanor of illegal entry.

Nearly 850 parents have been cleared for reunification with their children, according to the government report which was filed as part of the American Civil Liberties Union's (ACLU) lawsuit challenging family separation. But 719 parents have been served deportation orders, which may force them to choose between being reunited with their children and then being sent with them to the violence they fled, or being deported alone and leaving their children in the United States.

"That's a pretty horrifying statistic," Lindsay Toczylowski, executive director of Immigrant Defenders Law Center, told NBC News. "We have had such limited communication with parents it was difficult to know where they were in their case."

As parents and children languish in detention centers -- where many have alleged abuse -- the coverage of the story that dominated headlines for much of last month has largely died down as last week's NATO summit and Trump's meeting with Russian President Vladimir Putin on Monday has captured the nation's attention.

The voices of the people directly affected by Trump's immigration policy have also gone largely ignored throughout the crisis, wrote Jordan Holycross at Fairness and Accuracy in Reporting (FAIR) this week.

Examining coverage by six major corporate networks over the course of one week when the family separation crisis was first garnering nationwide attention, FAIR found that out of 248 sources quoted in 42 stories, only 15 sources were immigrants. Thirteen advocates who work directly with immigrants were interviewed for the stories, while the vast majority of sources were from the federal government.

"Corporate TV news programs amplified the voices of the federal government while neglecting to show the lives and tell the stories of those affected by federal policy," wrote Holycross. "The programs framed the story as whether or not families who try to cross the U.S.-Mexico border should be separated, rather than exploring the causes and consequences of the current situation. In their coverage, the live experiences of these immigrants are reduced to leverage for U.S. politicians."

Meanwhile, a number of immigrants' voices were heard Friday in several interviews filed as part of a federal lawsuit, in which they alleged grave mistreatment in detention centers.

Parents and children described being given rotten, inedible food and dirty drinking water, and subjected to sleep deprivation -- just the latest reports of abuse to come out of immigrant detention centers.

Democratic lawmakers and progressive congressional candidates like Alexandria Ocasio-Cortez have condemned the facilities for the secrecy with which they operate.

commondreams.org is a progressive publisher
Related Topic(s): Child Abuse; Deportation; Detention Centers For Immigrant Children; Family Separation; Immigrants, Add Tags
Add to My Group(s)
Go To Commenting
The views expressed herein are the sole responsibility of the author and do not necessarily reflect those of this website or its editors.