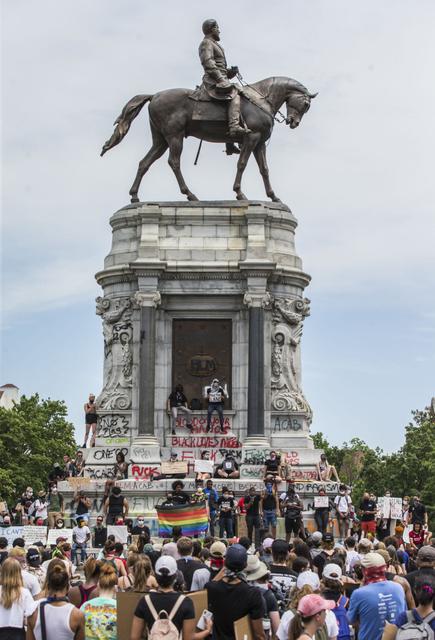 The murder of George Floyd has reignited the debate whether to remove statues and rename military bases memorializing historical figures accused of treason, racism, owning slaves, and of committing genocide. Though the furor has subsided somewhat, the debate continues. Several speakers at the Republican National Convention including Donald Trump Jr., accused democrats and other advocates of what I will term the "Movement to Remove and Rename" (MRR), of seeking to erase the accomplishments of our Founding Fathers and of our glorious past. Speaker of the House Nancy Pelosi remains supportive of the MRR, proclaiming the statues and the naming of military bases that honor Confederates as "plainly racist and a grotesque affront to (America's) ideals." In a recent news conference, Presidential candidate Joe Biden, like Pelosi, expressed his limited support for the MRR, but was quick to note, however, the government's "responsibility to protect" the statues and memorials of non-Confederates, e.g., Christopher Columbus, America's Founding Fathers, etc.

Like his son, President Donald J. Trump, not unexpectedly, recently characterized the MRR as unpatriotic and the undoing of American history while alluding to those demonstrators who destroyed and/or defaced such "sacred memorials" as terrorists. During an earlier counter-demonstration in opposition to the removal of a statue honoring Confederate General Robert E. Lee, Trump offered an argument that was untypically coherent and interestingly on point.

"This week it is Robert E. Lee. I noticed that Stonewall Jackson is coming down. I wonder, is George Washington next week? And is it Thomas Jefferson the week after? You know you really have to ask yourself, where does it stop?"

The answer to Trump's questions regarding the fate of all memorials honoring historical personages will depend upon three factors. The first is whether the MRR is truly a sincere and long overdue acknowledgment and expression of outrage regarding racism, slavery and genocide. Second, has this nation at long last garnered the courage to go beyond the myth and rhetoric and call to task all who are complicit, whether they be Confederate Generals, deified Founding Fathers, Spanish Missionaries, or even the "discoverer" of the New World? Having personally witnessed several demonstrations and having spoken with many members of the movement, I am impressed by their motivation and enthusiasm and convinced of their altruism and sincerity. Consequently, I have no reason to doubt the movement's adherence to these first two criteria. What remains, therefore, and what I will attempt in this essay, is an analysis and exploration of the character, behavior, and where relevant, the accomplishments of several often memorialized American icons to determine whether they are worthy of honor and respect or of condemnation and sanction?

The Case Against Washington, Jefferson, and Columbus

As is widely known, I think, though perhaps less frequently spoken about, George and Martha Washington owned and profited from the labor of over 200 slaves before, during, and after his Presidency. Thomas Jefferson's reality was even more abhorrent. Despite having penned the celebrated decree that, "We hold these truths to be self-evident, that all men are created equal, that they are endowed by their Creator with certain unalienable Rights, that among these are Life, Liberty and the pursuit of Happiness," and publicly decrying slavery as a "moral depravity," Jefferson owned over 600 slaves, profited from their labor, and believed blacks to be inferior to whites, according to the Foundation that bears his name. While an outspoken critic of "mixing" the races, Jefferson fathered at least six children with one of his slaves Sally Hemings, the first when she was just sixteen. Consequently, Thomas Jefferson, in addition to being a Founding Father and a principle author of the Declaration of Independence was also a racist, slave owner, rapist, and pedophile.

Christopher Columbus's voyage of "discovery" was motivated not by scientific curiosity or altruism, but by covetousness and insatiable greed. According to his own writings, his goal was to expropriate, by any and all means necessary, huge caches of wealth from those he encountered, in order to enrich himself and his sponsors. When he returned to Espanola (today Haiti and the Dominican Republic) in 1493, he was installed as Viceroy, promptly enslaving and systematically instituting policies that entailed the extermination of millions of the indigenous Taino inhabitants. Upon Columbus's departure seven years later, of the eight million Taino that populated Espanola at the onset of Columbus's regime, less than 100,000 remained alive.

Camillo "Mac" Bica, Ph.D., is a professor of philosophy at the School of Visual Arts in New York City, a long-time activist for peace and justice, a member of the Vietnam Veterans Against the War, and the coordinator of the Long Island Chapter of Veterans for Peace. His books include "Beyond PTSD: The Moral (more...)

Related Topic(s): History; People; Truth; Volkswagen, Add Tags
Add to My Group(s)
Go To Commenting
The views expressed herein are the sole responsibility of the author and do not necessarily reflect those of this website or its editors.

Civil Disobedience: The Only "Weapon" We Have Remaining?

The Invisible Wounds of War

Addressing Healthcare Worker's Stress and Trauma During the Covid-19 Pandemic

The Nature of War