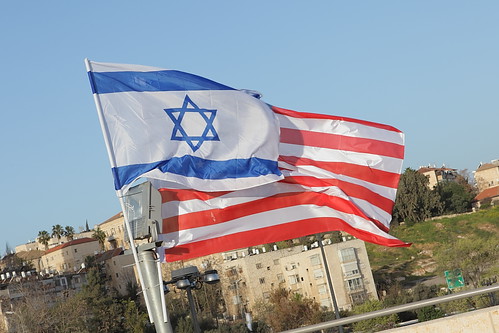 This sacred-cowness of Israel is one of the reasons that I have difficulty voting for the best candidate for the Presidency that there has been in a long time, possibly in the last 50 years: Senator Bernie Sanders. The fact that U.S. elections are an exercise in futility and a sham notwithstanding.

Israel has continually carried out crimes against humanity; including war crimes and the mass murder of children, "colored" children (Palestinians) and never been held to answer for those crimes. Yet the United States, the world's bastion of "democracy" and moral ascension, continually and steadfastly supports its annex (Israel) no matter how horrendous its actions. Israel has repeatedly flouted U.N. resolutions on everything from settlements to occupation; yet, when convenient, the United States and Israel cite U.N. resolutions when they are in their favor.

Israel uses illegal weapons, weapons outlawed by international law (just like its big brother/sister) with impunity. Israel refuses to sign the nuclear Non-Proliferation Treaty (N.P.T.), has nuclear weapons, then turns around and chastises Iran for its, apparently peaceful, nuclear program. How can this be? Where are the United States "sanctions" on Israel? Where are the "air strikes" that killed hundreds of thousands in Iraq because the United States believed (like hell) there were "Weapons of Mass Destruction" there?

Palestinians are murdered by Israeli soldiers and police on a regular basis. Typically, as with one recent case, some teenage Palestinian is murdered and the police say: "I thought he was reaching for a weapon...I feared for my safety". This stuff sounds eerily familiar to Black People in America.

How is it that Israel, that wails about the "Holocaust" and the bigotry from which it was resultant, employs the same bigotry to shield itself from bigotry? If I recall correctly, the "Holocaust" was perpetrated by Germans; white folks against other white folks. Germany did not import the Jews there, they were already there; it was their "home". Seems to me that Israel ought to be attacking Germany and building settlements there. How in the hell did the Palestinians (people of color) end up being the whipping boys for the "Holocaust" by default? And Israel and the United States are arrogant enough that they think the rest of the world (which by the way, consists mostly of people of color) cannot see through this racist garbage?

It ain't so. The world sees it for what it is and, in an amalgamated fashion, is starting to react to it in a myriad of choreographed ways. Slowly, but surely.

The United States worst nightmare is that some black people (i.e. Africa) might someday get a nuclear weapon. All bad, dad. On the other hand, WTF are you "Westerners" scared of? I mean, after all, you are the only people in the history of the world, to drop nuclear weapons on civilians. And you thought it so much fun, you did it twice. And your moral authority comes from where? Oh yeah, "God". God bless America!

So-called Americans better hope like hell there is no God. Especially, a just and decent one. If there is, the United States is in deep do-do; as is its international concubine: Israel ( or maybe, the U.S. is Israel's concubine). I like to think that the United States, given my agnosticism, is proof that God does not exist...at least not a righteous God. Something better articulated by your founding father, patriot, slaver, pedophile, racist and rapist Thomas Jefferson who said "I tremble for my country when I reflect that God is just, that his justice cannot sleep forever..."