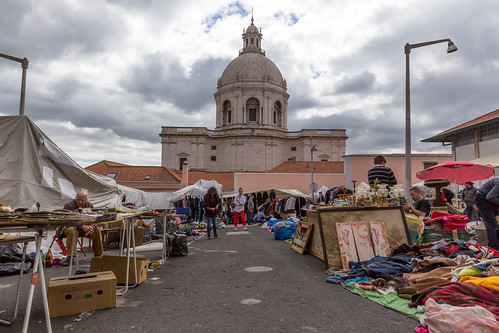 As I sit on the small balcony on the top floor of an old house in the working class neighborhood of Alfama in Lisbon, Portugal, it is early evening, the time for wine and voices wafting on the fragrant breeze through the twisting cobble-stoned streets. The National Pantheon (Panteao Nacional) stares me in the face. I stare back, and then look up to the heavens and to the cross that is silhouetted against the blue sky. It crowns the Pantheon's massive dome. On its faÃ§ade stand three statues, only one of which I can see clearly. She is Santa Engracia, a Christian martyr from before the period when the Roman Emperor Constantine legalized and legitimatized Christianity, transforming the cross into a sword. It was her church before the state found it acceptable to convert it into a space to glorify its secular saints and its military and political prowess.

Rome never dies, although it falls in different guises but is resurrected by the human urge to dominate others. The savage complicity between church and state perdures through the ages.

Wherever you go, the monuments and statues glorifying humanity's violent history are always presented as a form of liberation. Tourist attractions. Generals, princes, and kings atop horses, brandishing swords and guns, "grace" squares and monuments as a reminder to the common folk of who is looking down on them and to whom they should look up, or look out. Yet even when they do show obeisance to their "masters" who rule them from the heights, the commoners are left out of the spoils of empire, and if they object, they are taken out without hesitation.

On a clothesline outside the windows of the house across the street where a woman peeks out, the pants and underwear humbly sway to a different tune, a sad Fado moan that seems to ask: What has happened? Has it always been like this?

I am tempted to tell the underwear it has but realize its job is to cover-up, not expose the truth.

Rilke, a German language poet of most delicate sensibilities, asked from one of his castle abodes provided by one of his many rich lady friends:

Who, if I cried out, would hear me

Among the angels' hierarchies?

And even if one of them

Pressed me against his heart

I would be consumed in that

But down below, the omnipresent graffiti on the walls is a bit less circumspect. It shouts: f*ck the elites! (Translation provided)

The old poor murmur their prayers and the angry young spray their rage on every canvas they can find. Both seek hope outside the museums and mausoleums erected by the wealthy to glorify themselves.

And fate answers: It's the same old story, a fight for love and glory. Those seeking glory, the rich elites, the powerful with the guns in all the countries across the planet, with a few exceptions, smash the lovers and the humble people as they struggle to keep faith and hope alive. Who will liberate them?

Related Topic(s): Church-State Theocracy; Complicity; Jesuits; Monument; Saint; Technology; War; Wars, Add Tags
Add to My Group(s)
Go To Commenting
The views expressed herein are the sole responsibility of the author and do not necessarily reflect those of this website or its editors.