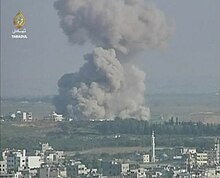 On May 5, Hamas commander Mohammed Deif issued a warning to Israel's government: Unless Israeli police and troops stopped attacking Palestinians in Jerusalem -- including not just those protesting against the regime's theft of their homes in the Sheikh Jarrah neighborhood on behalf of Israeli "settlers," but also worshipers at al-Aqsa mosque, one of Islam's most sacred sites -- rockets would fly.

On the same day, the Biden administration notified Congress of its approval for Boeing's sale of $735 worth of Joint Direct Attack Munitions to the Israeli regime.

The Israelis ignored Deif's warning and continued their abuses. The rockets flew. And, in the name "self-defense," prime minister Benjamin Netanyahu ordered the war he badly needs to distract from his recent election defeat and his ongoing corruption trial.

As I write this, more than 200 Palestinian Arabs (including 59 children) lie dead in Gaza, as do ten Israelis (including two children).

President Biden says he supports a cease-fire, but his UN ambassador blocked a UN Security Council resolution calling for one. And those Boeing munitions are presumably on their way to help keep up the carnage for as long as possible.

Let's at least be honest about those weapons. The Israelis aren't really buying them. You are.

Each year, the US government dispenses $3.8 billion of your money in "military aid" to the Israeli government. The string attached to that aid is that the Israelis have to use it to buy American (rather than, say, Russian or Chinese) arms.

In fact, that's one of the main arguments that supporters of the aid put up when people object to the US government handing out such big welfare checks: It's not really aid to the Israelis, they say, it's actually just corporate welfare for American "defense" contractors, creating jobs right here in the good ol' US of A.

This is supposed to make you feel better about the whole thing, I guess. You shouldn't , though. If you think about it, every dollar funneled into artificially "creating jobs" in the "defense" industry is a dollar that could have instead been used by you to buy the things you actually want and need, creating real jobs providing those goods and services in the process.

But even if the corporate welfare angle did make sense, it also reveals that you, the American taxpayer, are financing the half-filling of body bags with the the bodies of children.

I suspect that may not be what Oliver Wendell Holmes had in mind when he told us that "taxes are the price we pay for a civilized society." If you share my suspicion, let "your representatives" in Washington know.

Related Topic(s): Israel; Israel And Us Relations; Israel Attacks Gaza; Israel Killing With U S Weapons, Add Tags
Add to My Group(s)
Go To Commenting
The views expressed herein are the sole responsibility of the author and do not necessarily reflect those of this website or its editors.