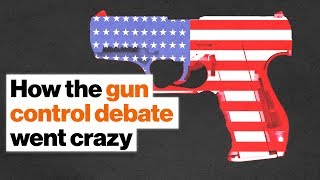 The gun control debate has been at fever pitch for several years
(Image by YouTube, Channel: Big Think)   Details   DMCA

Guns are banned in the UK, but the black market is booming and criminals are loading up on firearms.

Assailants using rifles killed 403 people, and 1,591 were killed by people using knives. Handguns were used in 7,032 killings, many of which resulted from criminals killing one another over, for example, drug distribution. See also this.

The police were responsible for 987 shooting deaths, about one-fourth of which were mentally disturbed people.

It turns out that prescription drugs are the 4th leading cause of death, which puts it up there with cancer and heart attacks. Harvard University reports that properly prescribed medications hospitalize 1.9 million Americans annually, killing 128,000 people, which places prescribed medicines in fourth place with strokes as a leading cause of death. Far more lives could be saved by focusing on careful drug testing rather than on gun control.

What then explains the fixation and constant propaganda about banning "assault rifles" when the total annual murders by assailants using all kinds of rifles is 403?

What explains the fixation on handguns that are the weapon of choice in only 41% of murders numbering only 7,032 deaths?

What is the point of disarming the population when private ownership of firearms prevents a large number of crimes. A study by criminologists Gary Kleck and Marc Gertz concluded that Americans use their guns annually to prevent more than 2 million crimes.

Those who advocate banning gun ownership demur, claiming guns are used defensively 100,000 times a year. Why then do gun controllers want to take away guns that prevent crimes six times the number of homicides?

Related Topic(s): Assault; Banned; Firearms; Guns; Killing; Violence, Add Tags
Add to My Group(s)
Go To Commenting
The views expressed herein are the sole responsibility of the author and do not necessarily reflect those of this website or its editors.