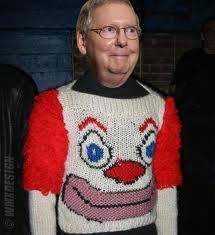 Late at night, unable to sleep, do you ever hear disturbing noises, Truthseekers? Sorrowful sounds that are difficult to perceive, but maybe -- just maybe -- emanating from a supernatural source?

That soft, muffled wailing coming from your cedar closet? The bone-chilling moan of your tortured Talbot's turtleneck? The agonizing scream from the carnation pink cashmere sweater you got from the consignment store last week?

Take a deep breath and be prepared for some uncomfortable news ... Your clothing may be trying to kill you. Or at the very least, wrest your soul from your body and thrust it into the boiling fire pits of the deepest dimensions of hell. It's enough to wrinkle even the sturdiest permanent press gabardine pantsuit.

Pat Robertson, would-be Presidential Candidate and full-time Rapture-Right blood-diamond-Billionaire-True-Believer -- is convinced our clothing might have a sinister motive. Particularly if it came from the Thrift Store rather than, say, Bloomingdale's. He's kinda like an older, crazier version of the kid from the "Sixth Sense" ... I see demonic doubleknits ... they're everywhere ... they walk around like everyone else ... they don't even know they are possessed polyester.

"Usually when one buys clothes second-hand at shops like Goodwill, one just wonders whether it's been laundered properly. But Pat Robertson brought an entirely new worry to the fore on Monday's episode of his "700 Club" program. Responding to an email sent in by a viewer, the elderly televangelist said that, while not all clothes have demonic spirits attached to them, it never hurts to take some precautionary measures."

Robertson was answering a question from viewer Carrie {insert irony here}, who wrote:

"I buy a lot of clothes and other items at Goodwill and other secondhand shops. Recently my mom told me that I need to pray over the items, bind familiar spirits and bless the items before I bring them into the house. Is my mother correct? Can demons attach themselves to material items?"

Robertson answered Carrie's question with a story about a girl who was troubled by a ring that had been prayed over by a witch. "She had to buy it and all hell broke loose because she finally recognized what it was," Robertson said, before claiming that demonic spirits can certainly attach themselves to objects.

Now, does this mean all second-hand clothing is a vessel of the devil? Not exactly, according to Robertson, but "it ain't going to hurt anything to rebuke any spirits that happened to have attached themselves to those clothes."

Hey, even unholy disembodied spirits can appreciate a good grab-bag sale, right? Can't blame the eternally damned for wanting a good bargain, can you? Especially if it comes with the added bonus of allowing these hellions a free ride on an unsuspecting Christian who dons an otherwise normal-looking cardigan and then succumbs to the unnatural urge to disembowel a neighborhood pet in an offering to Lord Satan.

I remember when the worst you could expect from Goodwill goodies was perpetual itchiness and missing buttons -- not eternal damnation. So what's an otherwise good Christian bargain-shopper to do? Launder the items with Ivory Soap and rinse in holy water? Wash them in the blood of the lamb? Where do you find lamb's blood these days?

Now that the Pope has abdicated his post and traded his pious red pumps for plain brown loafers -- has Pat Robertson reached out to warn him that this lesser footwear might imperil his very soul? If he got them from a (sinister howl) used clothing store????

Kathy never expected a career in radio as a talk show producer. Born and raised in Atlanta, Georgia, Kathy was completing her nursing degree when in 2001 - in an emergency - she was asked to fill in as the producer of Mike's program. Within a few (more...)
Related Topic(s): Clothing; People Robertson Pat; Televangelist, Add Tags
Add to My Group(s)
Go To Commenting
The views expressed herein are the sole responsibility of the author and do not necessarily reflect those of this website or its editors.