"Bullies will always get what they deserve ... in the end." 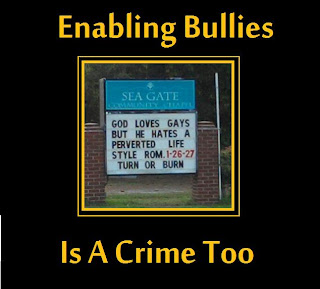 Bullsh*t. Wishful thinking has never substituted for justice. True, payback may be meted out to some bullies, but it is unfortunately too little and definitely too late. And in some cases, the bullies were abetted by enablers who hide behind the bully's home-grown pulpit:

Speaking at the second annual Federal Partners in Bullying Prevention Summit were the parents of Justin Aaberg, a gay 15-year-old from Champlain, Minn., who hanged himself after being bullied. The parents, Tammy and Shawn Aaberg, said that one form of the bullying came from a student religious group whose members told Justin that he was going to hell because he was gay.

The Jamey Rodemeyer bullying-suicide case has once again put bullying into the forefront of the national scene. This time, however, the hate speech was so intense and resulting indignation so high that law enforcement is looking to prosecute the perpetrators:

The Amherst Police Department's Special Victims Unit has said it will determine whether to charge some students with harassment, cyber-harassment or hate crimes. Police said three students in particular might have been involved. Jamey was a student at Heim Middle School.

This latest twist in aftermath of Jamey Rodemeyer's tragedy now offers a new element to gay teen suicides - one that the Christian Right has blown into persecution proportions, but, nonetheless, should take stock of: hate speech as a form of hate crime. Right wing pastors have nationally decried the criminalization of hate speech as a form of religious oppression and persecution. What has long been the provenance of the church - telling people who are going to hell and who are not - is questioned as doing more harm than good: preachers' sermons, it seems, have become more sadistic than soothing, more controlling than liberating. The control exuded by some ministries across the country has even taken an ironic twist:

Go To Jesus Or Go To Jail

For years, the Christian Right has been trying to use a warped take on justice, but recently, a city in Alabama has put the philosophy into action:

Now a small city in Alabama has just taken things one step further. It plans to actually establish a "jail or Jesus" program. Under the so-called "Operation Restore Our Community" program, low-level offenders in Bay Minette will have a choice: pay fines and go to jail or agree to attend a church every week for one year. If they choose church, their records will be cleared after twelve months.

If this seems dangerously close to the "convert or die" ethic, then maybe it's time to revisit it - in another article. But for now, we need to monitor the reactions of the Christian Right to proposals and entities like GLSEN (Gay, Lesbian and Straight Education Network) because the public is beginning to look deeper in the subject of bullying and what causes or enables it. When hate speech causes suicide, it may now be considered a criminal vehicle or hate crime. What drives the criminal vehicle will also come under intense scrutiny.

Thoughts of "bully enabling" have been considered before in other articles. Upcoming Halloween Hell Houses have been seen as vehicles for depression and suicide, but implications of accountability have never been so fully exploited as with Jamey Rodemeyer's story. True, the suicide of Tyler Clementi, the teen who was filmed in his dorm room having sex with another male student, resulted in prosecution of his tormentors, but it was not linked in any way to religious bigotry, and Jamey Rodemeyer's is since his tormentors repeatedly said that he was "going to hell."

As suicides continue (and they surely will - most notably after Halloween, but we may not be aware of them), the debate of reducing bullying vs. we-don't-want-gays-indoctrinating-our-kids will rage on, the authority, the very bedrock of the Christian Right's intolerance may be at stake. What will surely be a clash of values will develop into a war consisting of "who's the victim here?" Cries of "freedom of speech and religion" will be used as armor against the slings and arrows of "calls for accountability."

Unfortunately for the Christian Right, the "calls for accountability" are gaining momentum thanks to Jamey Rodemeyer.

Rev. Dan Vojir is has been writing/blogging on religion and politics for the better part of ten years. A former radio talk show host (Strictly Books " Talk America Radio Network) and book publisher, Dan has connected with some of the most (more...)
Related Topic(s): Bullying; Christian Right; ENABLER; Glsen; Hate Crimes; Jamey Rodemeyer, Add Tags
Add to My Group(s)
Go To Commenting
The views expressed herein are the sole responsibility of the author and do not necessarily reflect those of this website or its editors.