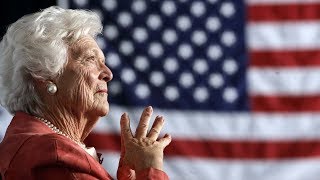 As the world remembers former first lady Barbara Bush, who brought grace and dignity to American public life and who was the only woman in American history except for Abigail Adams who was married to one president and a mother to another, we should remember that American politics has not always been a place of warring tribes and political insults.

In the 1992 presidential campaign, George Herbert Walker Bush and Barbara Bush battled against William Jefferson Clinton and Hillary Clinton for the highest stakes in American government and world leadership.

In those days, America was the leader of the free world, and while politics was not always the noblest profession, there were standards in American civic life and values that transcended the great divides of political partisanship.

As Barbara Bush is laid to rest, surrounded by a loving family and grateful nation, many words of affection and respect will be spoken of her. All of those words will be said with sincerity and admiration for who she was, all she did and the American spirit she embodied so gracefully.

Barbara Bush was a loving mother, a devoted wife and a wonderful first lady. While George Herbert Walker Bush was the leader of the free world, steering international politics skillfully as the Berlin Wall tumbled down, Barbara Bush was making the world a better place by championing the great cause of literacy, which benefited so many children and adults too.

This is not the time or place to comment at length on contemporary political affairs, but it is a good moment to reflect on the friendship and respect that Democrats named Clinton and Republicans named Bush came to feel for each other.

In a remarkable television interview, on The David Rubenstein Show on Bloomberg, Rubenstein brought together George W. Bush and Bill Clinton to discuss the friendships that grew between three former presidents representing two political parties and two families.

After leaving office, they collaborated with each other on various matters, including helping those who had been ravaged by national disasters.

George H. W. Bush, George W. Bush and Bill Clinton shared the distinction of having been leaders of the nation, and they developed working friendships of mutual respect and worthy collaboration despite their differences of policy, politics and philosophy.

When George W. Bush wrote his memoirs, "Decision Points", in 2010, he discussed the bond between Clinton and his father. Clinton offered the book lavish praise, said people of all political viewpoints should read it and often reminisced about his friendship and respect for the 41st president, whose political goodwill and foreign policy expertise he praised and admired.

In a wonderful interview on C-SPAN in 2014, Barbara Bush spoke of this friendship, saying: "I love Bill Clinton. Maybe not his politics, but I love Bill Clinton." The former First Lady continued: "My husband, Bill Clinton, and I have become friends, and Bill visits us every summer. We don't agree politically, but we don't talk politics."

She spoke of the relationship between Bush 41 and Clinton as a kind of father-son relationship and noted how loving Clinton always was to her husband when they travelled together.

From her youth until her last moments on earth, Barbara Bush could be plain spoken and strong willed at times and always radiated a humanity and goodwill that is quintessentially American.

Related Topic(s): Clinton Bill; Death; Family; Mother; People Barbara Bush, Add Tags
Add to My Group(s)
Go To Commenting
The views expressed herein are the sole responsibility of the author and do not necessarily reflect those of this website or its editors.