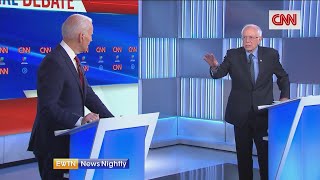 On the surface, the coronavirus emergency has nothing in particular to do with Joe Biden and Bernie Sanders. What's obvious is that Donald Trump's unhinged bluster and inaction let the pandemic get a lethal jump on the United States, people are dying while huge numbers of lives are in jeopardy, and quick drastic steps are imperative. Yet at the same time, the differences between what Biden and Sanders are advocating have enormous implications for what could be done to curb the deadly virus in this country.

The absence of a public health system is consistent with a timeworn pattern of massive holes in the public sector. Biden merely wants to patch up some of the holes, while Sanders wants to build strong structures on truly democratic foundations.

"It is time to ask how we got to where we are, not only our lack of preparation for the virus, but how we end up with an economy where so many people are hurting at a time of massive income and wealth inequality," Sanders said at the close of his recent debate with Biden. "It is time to ask the question of where the power is in America. Who owns the media? Who owns the economy? Who owns the legislative process? Why do we give tax breaks to billionaires and not raise the minimum wage?"

While so-called "moderate" Democrats like Biden don't want to answer -- or even hear -- such questions, Sanders insists on continuing to ask them. Such perseverance has never been more needed than at this pivotal moment, with so many lives in the balance. "Where the power is in America" has everything to do with why the U.S. government's response to the unfolding coronavirus catastrophe has continued to be so anemic, foreshadowing so many more deaths and so much more grief.

It's urgent to implement all-out measures to contain the coronavirus spread (seriously aiming for containment rather than merely "flattening the curve"). Meanwhile, policies are needed to make sure that insurance-industry profiteers and other sectors of corporate America don't get away with rapaciously benefiting from catastrophe in ways that would cause untold misery for vast numbers of people.

A pair of campaign documents released this week -- the Biden "Plan to Combat Coronavirus (Covid-19) and Prepare for Future Global Health Threats" and the Sanders "Emergency Response to the Coronavirus Pandemic" convey big differences in approach to the current unprecedented crisis.

Biden proposes to tweak the health care system and aid only some who suffer economic distress. In sharp contrast, Sanders is proposing far-reaching measures that include free health care for all ("Medicare will ensure that everyone in America, regardless of existing coverage, can receive the health care they need during this crisis") and major financial assistance to all ("emergency $2,000 cash payments to every person in America every month for the duration of the crisis").

Calling for programs that would spend at least $2 trillion in response to the coronavirus emergency, Sanders laid out commensurate programs -- to "mobilize on a scale not seen since the New Deal and World War II to prevent deaths, job losses, and economic ruin."

Joe Biden vs. Bernie Sanders is not only an electoral contest between presidential candidates. It's also a contrast of patchwork fixes vs. profound structural changes. Refusal to upset the apple carts of corporate power vs. willingness to fight that power. Tepid adjustments vs. truly transformational agendas.

Sanders was correct when he said last week that "poll after poll, including exit polls, show that a strong majority of the American people support our progressive agenda." Days ago, the Bernie 2020 campaign sent out a mass email declaring that "our campaign has won the battle of ideas."

Whether the ideas that Sanders is championing can appreciably shape the government's response to the coronavirus will have a lot to do with how successful the United States can be in limiting its terrible effects.

Related Topic(s): 2020; Bernie Sanders; Corona Virus Coronavirus Covid-19; Joe Biden; Pandemic, Add Tags
Add to My Group(s)
Go To Commenting
The views expressed herein are the sole responsibility of the author and do not necessarily reflect those of this website or its editors.