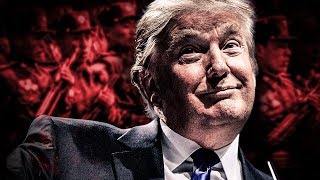 President Donald Trump's plan to stage a mega military parade in the American capital provoked a broad swath of opposition, from conservatives and liberals alike.

Part of the objection, however, seems to stem from an unspoken embarrassment -- that such a military display shatters American democratic pretensions, at home and around the world.

Surprisingly for a nation that repeatedly boasts about having the most powerful military force on the planet -- and, indeed, ever in the whole of recorded history -- there was scant enthusiasm this week for Trump's reported proposal for a full-scale military parade to be held later this year along Washington DC's Pennsylvania Avenue.

Planning details are still in the works for the proposed event, which is only being sketchily discussed at this time, and may not even materialize.

Trump is said to have been wowed by the military procession he attended in Paris last July on France's annual Bastille Day. Ever since then the American president has been prodding his aides to stage a similar martial spectacle in the US.

America's Independence Day on July 4 or Veterans Day on November 11 have been suggested as possible dates to hold the event, which would see columns of troops and weapons filing down the iconic avenue stretching from the Congressional government building on Capitol Hill and the president's White House residence.

The New York Times reported with a tone of misgiving: "Tanks, jets and other killing machines painted olive-drab and tan could be rolling the routes of the nation's capital later this year for a peacetime parade inspired by President Trump."

But, it added: "Few lawmakers -- if any -- said they loved the idea of Mr Trump's parade. Some shrugged it off. Others called it undemocratic. Many lamented the use of the military's time and money."

Politico reported: "Trump's military parade draws bipartisan rebuke." It said lawmakers on both sides of the aisle decried such an event as "a break with democratic traditions."

Senior Democrat Representative Adam Smith is quoted as saying: "A military parade of this kind would also be a departure from the values of our constitutional democracy. A military parade like this -- one that is unduly focused on a single person -- is what authoritarian regimes do, not democracies."

Other commentators focused their objections on what they said was such an event pandering to Trump's notoriously outsized ego.

A Washington Post commentary said that Trump's penchant for pomp and grandiose ceremony makes him a sucker for "the sort of martial display these days more associated with single-party states and irredentist autocrats."

Republican Senator Lindsey Graham, who is well connected to the military establishment and often espouses hawkish militarist foreign policy, seemed uncharacteristically coy about the parade idea. He said: "I'm not looking for a Soviet-style hardware display. That's not who we are. It's kind of cheesy. I think it shows weakness, quite frankly."

Related Topic(s): Military In Politics; Military Madness; Military Spending; Parade; Trump Ego, Add Tags
Add to My Group(s)
Go To Commenting
The views expressed herein are the sole responsibility of the author and do not necessarily reflect those of this website or its editors.