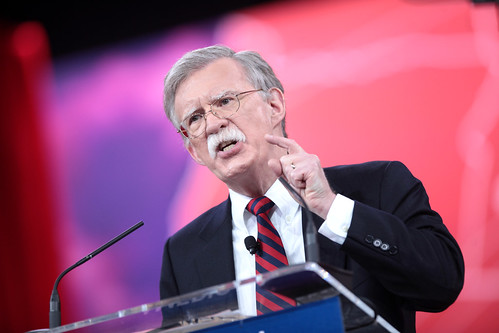 Beyond the general concerns regarding the nomination of John Bolton as National Security Adviser, there is also the specific issue of his impending access to the most highly classified intelligence information that the United States possesses.

There are a number of reasons why Bolton should be denied a clearance, including his well-known record of abusing subordinates at the State Department and colleagues at the United Nations. Bolton also has a close personal relationship with Israel and its government that may have included divulging classified information. The Israeli connection is particularly sensitive because Bolton is beholden to casino billionaire Sheldon Adelson, who has funded his activities since he left the State Department in 2006. And Bolton knows how to return a favor, approving of Adelson's suggestion to detonate a nuclear bomb in the Iranian desert, just to warn them what might be coming.

Adelson, a major GOP donor, was displeased with Rex Tillerson and H.R. McMaster, and to have been instrumental in their removal. Both men supported the nuclear agreement with Iran and both are now gone. McMaster was also targeted as "anti-Israeli" for having opposed moving the US Embassy from Tel Aviv to Jerusalem.

Bolton's regard for Israel has included unauthorized disclosure of classified information when he was Undersecretary of State for Arms Control and International Security. He collaborated with the Israelis, often without the State Department being aware of what he was doing, to justify a US attack on Iran. The strategy to bring about a war included diplomatic pressure, crude propaganda, and the production of fabricated evidence by Mossad.

Bolton was technically under the supervision of Secretary of State Colin Powell, but he violated existing State Department regulations by taking a series of secret trips to Israel in 2003 and 2004. Thus, when Secretary of State Colin Powell was saying administration policy was not to attack Iran, Bolton was working with the Israelis to lay the groundwork for a new war. During a February 2003 visit, Bolton assured Israeli officials in private meetings that he had no doubt the United States would take down Saddam Hussein, before dealing with Iran and Syria.

During multiple trips to Israel, Bolton had unannounced meetings, including with the head of Mossad, Meir Dagan, without the usual reporting cable to the Secretary of State. Those meetings clearly dealt with a joint strategy on how to bring about political conditions for an eventual US strike against the Iranians.

John Bolton, while serving as US ambassador to the United Nations, also went behind his boss's back to supply Israel with crucial information on American plans at the U.N. so as to redirect US policy. Dan Gillerman, who served as Israel's Ambassador to the U.N. in 2006 when Bolton was US ambassador has described how "in more than one case, Ambassador Bolton called me and alerted me to the fact that his mission -- the United States mission to the U.N. -- was about to vote against Israel and asked that I alert the prime minister, who at that time was Ehud Olmert. In more than one case the prime minister called the president, who was then George W. Bush, and got him to overrule the State Department."

Bolton would regularly reach out to the Israelis to subvert positions being supported by the US government, as in August 2006 when the U.N. Security Council was considering Resolution 1701, with the purpose of ending a month-long war between Israel and Hezbollah in southern Lebanon. Bolton warned the Israelis what Secretary of State Condoleezza Rice was planning to support the initiative. Gillerman reports that "In that case John Bolton got in touch with me at about 8 o'clock in the evening, which was 3 in the morning in Israel, calling to say 'You have to call your prime minister and tell him that Condi Rice sold you out to the French.'"

Given what John Bolton did when last in office, he should never again be allowed to have access to classified information since he would clearly abuse that privilege to satisfy his own agenda. That President Trump will undoubtedly grant Bolton access to all sensitive information is discouraging, particularly as the new Adviser, supremely sure of himself and possessing a proclivity to do what he considers expedient without regard for consequences, cannot be relied upon to do the right thing when it comes to national security. He should never be granted a clearance to use top level intelligence and should never be placed in a position of authority that would permit him to do mischief.

Unfortunately, urging President Trump to reverse the Bolton decision because of the grave damage it will inevitably do to the United States is not likely to be received favorably by the White House.

Related Topic(s): Israel; John Bolton Warmonger; National Security Adviser; Security; Trump Dangerous, Add Tags
Add to My Group(s)
Go To Commenting
The views expressed herein are the sole responsibility of the author and do not necessarily reflect those of this website or its editors.