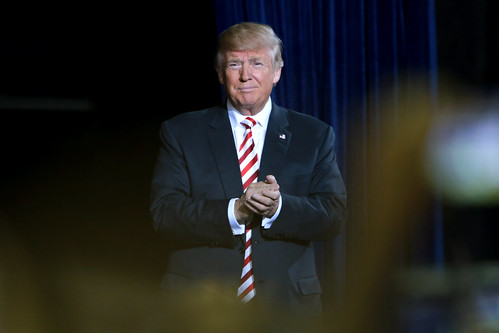 DURING HIS SUCCESSFUL 2016 presidential campaign, Donald Trump, for better and for worse, advocated a slew of policies that attacked the most sacred prongs of long-standing bipartisan Washington consensus. As a result, he was (and continues to be) viewed as uniquely repellent by the neoliberal and neoconservative guardians of that consensus, along with their sprawling network of agencies, think tanks, financial policy organs, and media outlets used to implement their agenda (CIA, NSA, the Brookings/AEI think tank axis, Wall Street, Silicon Valley, etc.).

Whatever else there is to say about Trump, it is simply a fact that the 2016 election saw elite circles in the U.S., with very few exceptions, lining up with remarkable fervor behind his Democratic opponent. Top CIA officials openly declared war on Trump in the nation's op-ed pages and one of their operatives (now an MSNBC favorite) was tasked with stopping him in Utah, while Time Magazine reported, just a week before the election, that "the banking industry has supported Clinton with buckets of cash ... what bankers most like about Clinton is that she is not Donald Trump."

Hank Paulson, former Goldman Sachs CEO and George W. Bush's Treasury Secretary, went to the pages of the Washington Post in mid-2016 to shower Clinton with praise and Trump with unbridled scorn, saying what he hated most about Trump was his refusal to consider cuts in entitlement spending (in contrast, presumably, to the Democrat he was endorsing). "It doesn't surprise me when a socialist such as Bernie Sanders sees no need to fix our entitlement programs," the former Goldman CEO wrote. "But I find it particularly appalling that Trump, a businessman, tells us he won't touch Social Security, Medicare and Medicaid."

Some of Trump's advocated assaults on D.C. orthodoxy aligned with long-standing views of at least some left-wing factions (e.g., his professed opposition to regime change war in Syria, Iraq/Libya-style interventions, global free trade deals, entitlement cuts, greater conflict with Russia, and self-destructive pro-Israel fanaticism), while other Trump positions were horrifying to anyone with a plausible claim to leftism, or basic decency (reaffirming torture, expanding GITMO, killing terrorists' families, launching Islamophobic crusades, fixation on increasing hostility with Tehran, further unleashing federal and local police forces). Ironically, Trump's principal policy deviation around which elites have now coalesced in opposition -- a desire for better relations with Moscow -- was the same one that Obama, to their great bipartisan dismay, also adopted (as evidenced by Obama's refusal to more aggressively confront the Kremlin-backed Syrian government or arm anti-Russian factions in Ukraine).

Related Topic(s): Agenda 21; Anti-trump; Campaign Related; Generals; Trump Campaign, Add Tags
Add to My Group(s)
Go To Commenting
The views expressed herein are the sole responsibility of the author and do not necessarily reflect those of this website or its editors.