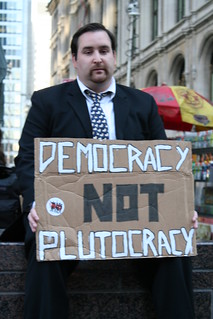 Democracy Not Plutocracy
(Image by BlaisOne)   Details   DMCA
[This is running as an op/ed in newspapers in my conservative part of Virginia.]

We, the people of the United States, are losing control of our destiny to an untrustworthy power.

It stands to reason that if money can buy political power, whoever has the most money will rule. The Supreme Court's Citizens United decision took us a long way down that path. A recent study confirms that what the people want has almost no effect on political outcomes while moneyed interests have considerable influence.

If America is to be ruled by whoever commands the most money, it will be the corporate system, far more than individual billionaires, that calls the shots. This corporate system does not operate the same as a human being, and it is more than the sum of individual corporations, or even of whole industries.

Each powerful corporation and industry seeks to get government to serve its special interests -- as in the subsidies given to oil and coal companies. But the corporate world has substantial common interests. Those who operate the system recognize those common interests and act to serve them.

It is in their interest to have a citizenry that distrusts the one power that might rival the power of the corporate world -- the government. And the corporate system has worked to foment such distrust.

The history of how the United States came to have five justices on the Supreme Court hand down a decision like Citizens United -- opening the floodgates for the rule of money -- shows how the system can work over time to make our government its tool. It takes some doing to get five men onto the Supreme Court willing to say, with a straight face, "We now conclude that independent expenditures, including those made by corporations, do not give rise to corruption or the appearance of corruption."

Likewise, it shows the power of the corporate system that today's Democratic president and Republican-controlled Congress are moving toward passing a trade bill that Nobel-laureate economist Joseph Stiglitz calls "a secret corporate takeover." That bill would take powers from our elected government and our legal system and hand them to a corporate-controlled panel. Regulation of economic activity could become so costly to governments at every level that the corporate system would be freed of some basic restraints.

Not just stealing the people's power over our democracy but also stealing power away from the democratic system itself.

In the decades since the 1950s, the corporate world has undergone moral degradation. You could call it "breaking bad."

As former Secretary of Labor Robert Reich has written, the CEOs of that earlier era believed themselves to be "industrial statesmen," managing their companies "for the benefit of all their stakeholders--not just shareholders but also their employees, communities, and the nation as a whole." The corporate world prospered but so did average Americans.

But now, Reich says, "corporate statesmen" have been replaced by "corporate butchers," who slice workers' pay to the bone while their own pay has soared from 20 times to 300 times what the guy on the shop floor earns.

Taking more than its fair share. Stealing our democracy. And, in the face of the challenge of climate change, willing to sacrifice our children and grandchildren for its own enrichment.

(Exxon, for example, considered climate change in its decision-making more than 30 years ago. And yet, by sponsoring climate denial, this multinational corporation persists continues to work to make the American public believe what the industry knows is a lie.)

This is the moral spirit of the system that is taking control of our destiny.

America's founders understood that the people will be well-served only when the power over their destiny lies in their own hands. The ruler now taking control is not so much our fellow human beings as a system that is on autopilot to sacrifice everything for its own wealth and power.

Andy Schmookler, an award-winning author, political commentator, radio talk-show host, and teacher, was the Democratic nominee for Congress from Virginia's 6th District. His new book -- written to have an impact on the central political battle of our time -- is
Related Topic(s): Citizens United; Corporate Fascism; Corporate Greed; Corporate Rule; Democracy; Tpp Trans-pacific Partnership, Add Tags
Add to My Group(s)
Go To Commenting
The views expressed herein are the sole responsibility of the author and do not necessarily reflect those of this website or its editors.