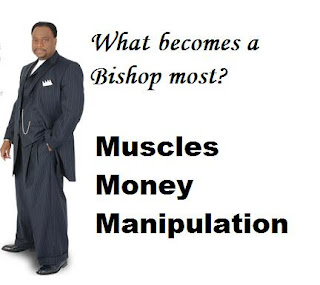 A delay in reporting can be serendipitous at times. Take the case of "Bishop" Eddie Long and his alleged gift-and-tryst escapades: I found out about it only 15 minutes after the initial AP story broke and was ready to do a BREAKING news flash for my blog when something personal arose and I'm just now getting back to the keyboard 24 hours later.

I was glad for the delay. This story's more entertaining than Ted Haggard's, and twice as important. The story has fleshed out considerably during the last 24 hours and it presents a clearer picture of what went on at New Birth Missionary Baptist Church in Atlanta.

In a lawsuit, two men in their 20s now are saying the bishop, Eddie Long, took them on trips, gave them gifts, bought them a car, gave them cash, gave them jewelry, all as a ploy to have sex with them. And they say it was the church's money that he was giving to them.

And the scandal was giving ... and giving ... to the Bishop: one more suit was filed today with predominantly the same allegations.

On the surface, this story is simply one of seduction with money and gifts. It's rather ordinary, and would only stand out in the news because of Long's name and because it involved homosexual undertones. The part that gets really interesting is this:

Eventually, it turned into such a relationship that the bishop had a ceremony with Anthony Flag called a covenant. Within that covenant, it was essentially a marriage ceremony where there were candles, exchange of jewelry and biblical quotes given, in order for Anthony to know and for the bishop to tell him, I will always have your back and you will always have mine. He would use biblical stories to talk about how important it was to follow your leader and your master and let him know that the acts he was engaged in were not necessarily meaning that he was a homosexual or that either of them was. But rather, the pastor, Bishop Long, was releasing his passion and his love for Anthony. (Italics, my own)

Considering his vicious attacks on same-sex marriage, this "covenant" now puts Long in the category of uber-hypocrite. Yes, "Bishop" Eddie Long is now in the Strom Thurmond-Ted Haggard big league: fostering disdain for one group of people while secretly having sex with them. Long's outspoken animosity towards gays has been prevalent for years.

Long has called for a national ban on same-sex marriage and his church counsels gay members to become straight. In 2004, he led a march with Bernice King to her father's Atlanta grave to support a national constitutional amendment to protect marriage "between one man and one woman."

Irony Alert! One of Long's book titles: What A Man Wants - What A Woman Needs.

All hypocrisy aside (which is tough to do, considering it takes a mental bulldozer to push it!), one of the main points of this scandal is that Long has used his titles to place him in authority, respect and even awe. He might have saved money by riding on his elevated credentials alone, but he chose to ply his sexual interests with gifts essentially bought by the church.

Rev. Dan Vojir is has been writing/blogging on religion and politics for the better part of ten years. A former radio talk show host (Strictly Books " Talk America Radio Network) and book publisher, Dan has connected with some of the most (more...)
Related Topic(s): Bishop Eddie Long; Homosexuality; LGBT; New Birth Missionary Baptist Church; Same-sex Marriage; Scandal; Sexual Predators; Southern Baptist Convention; Terry Jones, Add Tags
Add to My Group(s)
Go To Commenting
The views expressed herein are the sole responsibility of the author and do not necessarily reflect those of this website or its editors.