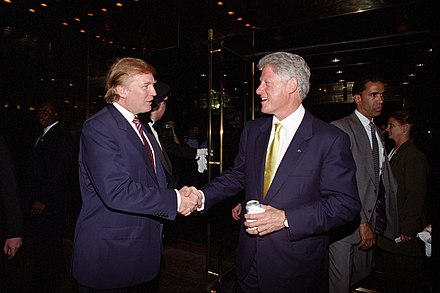 An antiwar-activist friend of mine brought up Bill Clinton last night. I hadn't given him a great deal of thought for some time; he still fundraises well, but he's not the superman former President that Jimmy Carter has been for decades.

Lessee: including Dwight D. Eisenhower, there have been four Presidents with active-duty service in my lifetime. The other three are Harry S. Truman, Jimmy Carter and GHW Bush.

For his part, Clinton was a Rhodes Scholar, and was deferred from service. I forget what important thing his Rhodes Scholarship produced, but Bill Clinton acknowledged he didn't want to go to Vietnam.

I did not vote for Bill Clinton in 1992, and cast a useless vote for Perot. But I suspected then that Clinton was going to take his party to the right. Clinton presided over the dissolution of the New Deal Democratic coalition concurrently with Tony Blair's similar stint as Prime Minister of Great Britain, in which Old Labour became New neoliberal Labour.And of course, the neoconservatives made clear their objectives for the conduct of US foreign policy in the Paul Wolfowitz manifesto, the Project for the New American Century (PNAC), in 1997, early in Bill Clinton's second term. American policy in the Balkans-- Iraq, Afghanistan, Syria have followed; troops lost their lives in Niger during the Trump Administration-- was according to neocon plans, which historically have included an inappropriate, and thus ineffectual, reliance on the dynamic of "the enemy of my enemy is my friend."After all the times that this continuum of policies has failed over 24 years (or pick your own starting time), one would think that either A. they would become, somehow, enlightened about the causes of the failure, or B. some President and Congress would have the courage to defy their demands that President Obama did not show, nor is President Biden showing much of today. But since PNAC, neocon foreign policy has largely been followed, no matter what Party is in power, whether or not members of the policy-making cabal hold the nearly-highest office, as Dick Cheney did for 8 years.It must have been much more difficult during the Trump presidency for the cabal, unlike with Obama, a rational human being, to be sure that they had some sort of political control over the unhinged, breathtakingly ignorant, uncontrolledly impulsive nationalist they were standing behind, even though at least outwardly Trump was surely a willing perpetrator of some neocon-approved acts of disruption. The neocon warmonger John Bolton found him impossible to deal with, and indulged in much public drama about the process.But there's a lot of money to be made in the wake of presidential policy-making, by people to whom the neocons have signaled that they will maintain business predictability for those in charge of acquiring and selling the remaining non-renewable natural resources on the planet. Read The Race for What's Left (Michael Klare, 2012). Those insiders did make whopping short-term profits with Trump, and long-term doesn't mean much to such people, they rationalize that they will not be around when it all collapses.I'm not in any honeymoon period with Biden.But a return to something like psychological normalcy for Americans of good will, even in the midst of a yet-unconquered pandemic, is at least one thing that Biden has delivered on. I very willingly cast my lesser-evil vote (in my red state) for him because I knew it was important to swell the popular vote total such that there could be no doubt who won.Silly me, the lying, onandonandonandon-- Joe Goebbels would be proud-- continued to drum up doubt. It has been an inexorable snowball rolling down a hill we don't see the bottom of.Congress got stormed by Trumpista crazies so rabid they even wanted to hang a prominent Republican. I notice none of the erectors of the scaffold have been arrested and charged, we would have heard of them by now.Now, besides continuing to keep the same lies au courant, in order to continue to sow popular distrust of the democratic process, the Repubs at the State level (particularly in the South, what a surprise) are doing their best to subvert democracy by slashing suffrage.

And besides all that, leading the charge for vaccine denial. Republican mothers and fathers are training their children to refuse vaccinations. Not all Republicans, to be sure, but the process of politicization of the public health measure we call "a vaccine" is afoot, at the elementary school level.

Bill Clinton seems almost quaint in 2021. What did he actually accomplish? He left office in 2000 with a positive federal exchequer, I guess that's something.

But he certainly presided over the devolution of New Deal Dems into a party more loyal than opposition.

And it was in his second Administration that the template for regime-change policies, and this thing I've just the other day seen and had explained to me: "R2P"-- "Responsibility to Protect"--the responsibility of powerful nations, like the United States, to intervene when leaders of this nation or that oppress, kill, whatever, their people-- became a thing. That political position, and Bill's legacy, were later carried on by his wife Hillary, and by my once-upon-a-time VVAW comrade John Kerry.

Related Topic(s): Foreign Policy Institute - Neocons; Neocons-PNAC; President Bill Clinton; Responsibility To Protect, Add Tags
Add to My Group(s)
Go To Commenting
The views expressed herein are the sole responsibility of the author and do not necessarily reflect those of this website or its editors.