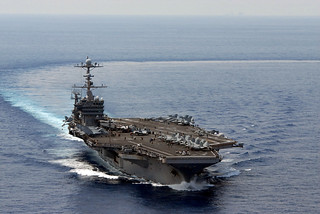 USS George Washington in the South China Sea.
(Image by Official U.S. Navy Imagery)   Details   DMCA
Washington is playing a dangerous game of "chicken" with the Chinese and Russians, who are attempting to defend themselves from the Washington Consensus, which reduces subject populations to that of serfs.

While the Russians, following the collapse of the Soviet Union, seemed willing to accept a sort of vassal statehood, it is increasingly clear today that such an assignation is intolerable. Thus, Vladimir Putin enjoys immense popularity as he stands up to the pro-Washington forces inside and outside of the US.

Meanwhile, the Chinese remember all too well the sting of British colonialism: opium addiction and the lasting effects of British presumptions of superiority. The Chinese place in the Washington Consensus has been staked out as, in the case of Russia, supplier of inputs to feed the hungry capitalism of the US and the Western European former colonial masters.

Directed by the United States, and backed up by its military, the real beneficiaries of the Washington Consensus were never intended to be the people of China, who were just viewed as a one billion plus, voracious, consumption-hungry machine for Western goods.

Thus, the US has embarked upon a strategy of containing the rise of Russia and China, rolling back any gains made by states friendly with them and willing to go against the neoliberal grain, and doing this by alternative means without overt or "hot" war. The US military establishment calls this "asymmetric" warfare. But the Chinese had another idea, and instead of becoming an engine of growth for Western economies, international political economists are now discussing the "China Model" or the "Beijing Consensus." Chinese Communist Party scholars now tout China as an alternative development model for the former colonized world. This is not what Washington had in mind with its so-called "China Opening" in 1972.

The Obama Administration, while pronouncing nostrums of civility and democracy, terms this multi-pronged attack on the right of self-determination of other countries, "Leading From Behind," a term borrowed from Nelson Mandela. This is a strategy akin to having a war in which the leading belligerent is "in the closet," out of view. Both the Russians and the Chinese know that Washington has declared war on them. So now, what does this mean for Asians' engagement with each other and Washington's engagement in Asia?

The particular line of contention now revolves around the geostrategically important sea lanes along which move oil from West Asia and North Africa to Japan and goods mostly produced in China yet consumed in every corner of the world. Because the Western media have touted the endangerment of global commerce caused by Chinese interference with these sea lanes, blogger Peter Lee decided to take a closer look. What he found is that even Japanese Prime Minister Shinzo Abe reportedly told the Diet (the Japanese Parliament) that "there are alternative routes" for the Strait of Malacca, "unlike Hormuz."

He concluded that we who are forced to rely on Western media have been fed a bunch of propaganda and, in reality, the South China Sea and the Strait of Malacca are not a critical sea lane for US allies Japan and South Korea and offers the real-time map of maritime activity to prove it. So, with the veneer of legitimacy completely torn away from US justifications for its actions in the region, what exactly are China and the US doing in the South China Sea?

The New Silk Road envisions a peaceful integration of the region fostering development of the Continent as a whole. A development that could be explained "of Asia by Asians for Asians." Yet because of its military presence in the form of bases from West Asia to the archipelago countries in the East, the US military is present, blocking any Asian-led effort at integration and already enforcing US policies of containment, rollback, and "leading from behind." China has proposed reviving The Silk Road that once connected Asians and Europeans. It calls this effort the New Silk Road and has the financial power to encourage countries along the route to participate in the regional opportunities brought about by extensive land and sea linkages.

This US military presence can be found in Syria and Turkey in the West, the Philippines in the East, and Afghanistan and Pakistan in between. And one by one, the US is employing a direct military conquest strategy, as well as the old tried and true divide-and-rule strategy. Resistance to US hegemony in the Philippines had resulted in the US military being kicked out of the country, but now it is set to return. The US scored a "two-fer" when it was able to secure its return to the Philippines while hawking the dangers of Chinese Imperialism.

The Japanese people have consistently voted in favor of local candidates who promise to stand up to the US and demand removal of American bases there, only to be betrayed by the central government in Tokyo. At least fifteen US bases in South Korea allow the imperial intruder to keep an eye on China and China-friendly North Korea from a close distance. It appears that Malaysia may be a target of Washington's asymmetric warfare: one of its commercial airliners was shot down over Ukraine; another just disappeared without a trace -- to this day. Now, Malaysia is in the midst of extreme political turmoil after $671 million mysteriously appeared in Prime Minister Razak's personal bank account and he was unable to convincingly explain to the public how it got there.

But Malaysia shares with Indonesia (site of the historic Bandung Conference) the Strait of Malacca which is the gateway to the Bay of Bengal (Myanmar, Bangladesh, and India) from the South China Sea. Curiously, Vietnam, still feeling the effects of the Vietnam War, just asked Washington for a greater role in countering China's actions in the South China Sea. Of China, Taiwan, Vietnam, the Philippines, and Malaysia, that all have claims on some of the Spratley Islands, China is the only country that had not constructed an airfield or done reclamation work on its claimed islands, according to the Center for Strategic and International Studies.

Once China began its reclamation and construction work is when the "problems" in the South China Sea began.

The United States has sent a steady stream of warships into the area claiming its right to navigate on the high seas. In December 2015, the US claimed that China's militarism in the area had eroded navigational safety in the South China Sea. In its rejoinder, China warned the US not to be "provocative." Last month, the US began air and sea "patrols" in the South China Sea sending one of its warships within 12 nautical miles of one of China's reclaimed islands. This month, the war of words escalated to limited kinetic action as flares were fired by a refueling US KC-130 Hercules while on air patrol. The US insists that it will continue its military patrols over the South China Sea as is consistent with international law.

Related Topic(s): China Politics; China Russia Alliance; New Silk Road; Propaganda; South China Sea, Add Tags
Add to My Group(s)
Go To Commenting
The views expressed herein are the sole responsibility of the author and do not necessarily reflect those of this website or its editors.

American capitalism: A disaster with no 'moral center'

Don't be fooled by "Inclusive Capitalism" It's still a disaster!

What is America doing in the South China Sea?