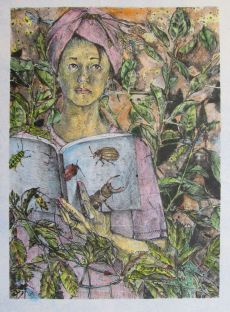 What if Trump Gets Us?
(Image by Akemi Ohira)   Details   DMCA
For one brief shining moment, it seemed some referring to themselves as news professionals skirted ever so closely to the bar of Cronkite/Huntley/Brinkley, once China lifted its veil of secrecy, revealing its citizens, like western democracies, as susceptible to linking the good, bad and ugly to global dangers full of pandemic potential.

Yet, just the facts cold watered media faces, sipped and slipped back into a barroom toast, shaken but not stirred, to investigative reporting, passing by.

Now, it's all about who Senator Elizabeth Warren will endorse, forgetting 2018 women, who ushered in a new democracy; recapturing half the Congress and most of the country preamble to masses of patriots standing in lines for hours to erase our 2016 error in judgment.

What if our 2020 Democratic primaries are more new chapter than old Communism, Socialism, Racism, Sexism or The Establishment where, inspired Constitutionally equal female citizens serve at a different tempo. Faster than a Trump snake projectile, they attempt to stave off the wave of Coronavirus threatening to drown both American healthcare and an unknowing president.

What if Democratic infighting distracts Independents and moderate Republicans, from a bloated hog in an updated red cap rooting for a first Monday in October health insurance surprise for both The Right and Left?

What if our Napoleonic piglet's only forte is rallying confused sheep and enticing nine attack dogs to guard against any Medicaid extensions, that save ACA from null and void chant, in mock replay of serpent promise: trust me, your eyes will be open wide shut and you will be remade in my image - selfishly me first, unencumbered by the differences between good and evil.

What if non-voters remain content with wading in a babbling brook of fat catfish, cajoled by feathered flies hooking them into failure to seize the day?

Distracted by will she or won't she endorse, what if Medicare and Social Security, like the Voting Rights Act, are gutted and left to bleed out, until death do usA apartheid?

When an Emperor with ostentatious wardrobe hides, he's a cayote stealing sustenance from the poor to give to the rich recipients of nepotism, what then?

What if prudence suggests we not check off Blue Tsunami from our Bucket Lists, while friends and family mesmerized by deluge of economic delusion are swimming against the current of justice for all, to spawn four more years?

But, what if, We the People have had enough of chaotic tweets, rally riots, screaming extremes: from The Right, I am the only one who can guarantee the fix is in; and the Left, millions who've never bothered will rise up and occupy increasingly closed polling places?

What if our Germaphobe-in-chief bidding, come unto me and I will give you societal uncertainty with pandemic certainty all on a handshake, wins?

What if, 60%, of the less than 50% of Americans who actually vote, after enduring ten debates, from twenty to two debaters, chose less out of sexism, racism or DNC dictate, and more to defeat what lives in America that nourished Trump enablers for decades?

What if massive numbers of voters in vastly politically different portions of the country are ignoring polls, pollsters, campaign calls during dinner, billionaire political ads and talking heads, to cast their votes for who they believe will defeat, the most dangerous president in American history?

What if we learn from the Trump/Pence era, a hard and bitter lesson of self-awareness, consciousness thinking and Equal Means Equal?

What if we now acknowledge Trump/Putin/McConnell/Mercer/Adelson/Koch have diminished the exceptional raison d'etre of America's electoral process and retrieve the gauntlet of Lady's Liberty's torch: it is for us to be the human levee asserting, This far you may come but no farther; here is where your proud waves halt?

Communications consultant and ghost writer for progressive political organizations, causes and candidates. Text/content contributor, script doctor, rewriting/editing political speeches and theatre scripts, screenplays, teleplays and other creative (more...)
Related Topic(s): Congress; Democrats; Injustice; Primaries; Republican; Revolution; Voting; Women, Add Tags
Add to My Group(s)
Go To Commenting
The views expressed herein are the sole responsibility of the author and do not necessarily reflect those of this website or its editors.