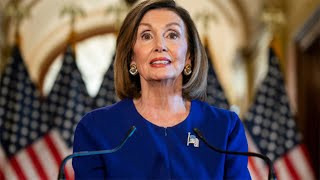 Yesterday the Dems in the House threw down the gauntlet, leaning on Trump's phone call to Ukraine President Zelenskyy in July as the basis for them calling for his impeachment.

Here's the transcript of the call, in part, which the Dems are in a twist about.

"I would like you to do us a favor though because our country has been through a lot and Ukraine knows a lot about it. I would like you to find out what happened with this whole situation with Ukraine, they say Crowdstrike...I guess you have wealthy people...the server, they say Ukraine has it. There are a lot of things that went on, the whole situation. I think you're surrounding yourself with some of te same people. I would like the Attorney General to call you or your people and I would like to get to the bottom of it. As you saw yesterday, that whole nonsense ended with a very poor performance by a man named Robert Mueller, an incompetent performance, but they say a lot of it started with Ukraine. Whatever you can do, it's very important that you do it if that's possible."

Essentially he asked Zelenskyy to look into whether Biden stopped the prosecution of his son. Here's what this writer previously wrote on that score, "Consider, it's hardly mentioned in the US corporate MSM but surely there was conflict of interest when Biden as the Vice President most assuredly got Biden's son Hunter on the board of Burisma Holdings in April 2015, the largest natural gas provider in Ukraine for $50,000 per month fee even though he had no previous experience in the industry. Obviously Hunters appointment was for the post coup regime to curry favor with the US under Obama." [1]

To believe VP Biden had nothing to do with his son getting on that board for that amount of money stretches credulity. Yet we hear nothing by the MSM about it.

So the Ukraine prosecutor at the time saw the conflict of interest and decided to pursue it. But the Ukraine government at the time since the February 2014 coup was pretty much under US hegemony thus getting the prosecution stopped in its tracks was a mere formality. And it doesn't matter whether one can prove Biden's finger prints were all over it.

As for Crowdstrike they were the cyber-security firm hired by the Democratic National Committee that implicated Russia being behind the hack of the DNC server. Let's remember VIPS, Veteran Intelligence Professionals for Sanity did their own investigation and pretty much confirmed there was no hack. It was a leak probably from someone within the committee so the whole Crowdstrike implication of Russian interference was bogus.

Also the two year Mueller investigation of supposed Russian interference in the 2016 presidential election could not prove Russia interfered.

Let's be clear. Trump is a horrible president, a self important narcissist who conducts policy by tweets which often contradict what he said in a previously tweet.

So what. We've had horrible presidents before who also contradicted themselves. What else is new.

The Dems have been hyperventilating and apoplectic over Trump since he was elected.

Retired. The author of "DECEIT AND EXCESS IN AMERICA, HOW THE MONEYED INTERESTS HAVE STOLEN AMERICA AND HOW WE CAN GET IT BACK", Authorhouse, 2009
Related Topic(s): Democrats; Impeachment; Trump, Add Tags
Add to My Group(s)
Go To Commenting
The views expressed herein are the sole responsibility of the author and do not necessarily reflect those of this website or its editors.