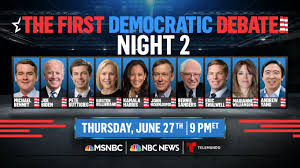 Next Thursday, the country at large will be introduced to Marianne Williamson as presidential candidate. For many however, she needs no introduction. Millions know her as their spiritual guide. She has written 14 books with four of them ending up as #1 best-sellers.

Nonetheless, that fame and popularity doesn't appear in polls. And that's not merely because her name is often excluded from such surveys. It's also because her constituents are not regular Democrats who vote in every primary. As such, they're typically not called by pollsters.

But anyone who has read her books or who watches her weekly lectures from New York City's Marble Collegiate Church knows of the devotion and energy of Marianne's followers. In fact, she has more of them on-line than nearly every one of her opponents. Those millions can be easily mobilized on her behalf.

So, who is this woman and how is she different from the other twenty Democratic candidates we'll see in the debates?

Based on my study of her two specifically political books (Healing the Soul of America and A Politics of Love), along with attendance at her lectures and a three-day seminar, personal interviews, and especially considering her own guiding light, Helen Schucman's A Course in Miracles, let me share with you what I think viewers should know about Marianne Williamson before next Thursday's debate. For me, the following seems to encapsulate her basic vision and platform:

Such positions focused on children, historical injustices, the poor, peace, climate change and income redistribution clearly make Marianne Williamson a populist in the best sense of the word.

Recently, on "The View," Meghan McCain took note of that and compared Marianne to Donald Trump. Williamson's response made it clear that, like Bernie Sanders, she embraces populism, but in a way quite different from Mr. Trump. Both Trump and Sanders, she acknowledges, were right in pointing out Washington corruption and the need to address Main Street's concerns. However, once in office, Trump did nothing about draining the swamp he correctly identified. Instead he cozied up to vested interested and filled his administration with officers from Goldman Sachs and other firms that as a campaigner he had railed against. Marianne's 40-year consistency in maintaining positions like those just outlined show she's not an inveterate liar like Mr. Trump. She will follow through on her promises.

On the same telecast, Whoopi Goldberg observed correctly that Marianne's program with its concern for children, their education and the poor in general is not at all unique. "Think about Head Start under Lyndon Johnson," she said.

Of course, Goldberg was actually referring to FDR's New Deal with its Social Security, minimum wage, unemployment insurance, and vast government jobs programs. Lyndon Johnson's Great Society initiatives with programs like Head Start built on Roosevelt's work. However, Williamson replied, the last 40 years have seen Republicans intentionally dismantle FDR's programs in favor of socialism for the rich that has included huge tax breaks, government subsidies (e.g. $26 billion annually to fossil fuel companies), and massive bail-outs after the recipients had crashed the economy in 2008. Marianne is convinced that the gains of the New Deal and Great Society must be restored. That's why she has pledged to fight for the Green New Deal and is fully supportive of TYT's Progressive Pledge.

It should be noted that in holding the convictions and offering the policy proposals just summarized, Marianne Williamson is not an outlier. She is not at all unrealistic or naÃ¯ve. She's not some Bible-thumper or New Age fluff merchant.

Instead, her voice for justice joins with those of human civilization's giants including the most acclaimed spiritual leaders everyone professes to admire. Among them are the Buddha, the Jewish prophets, Jesus the Christ, Mohammed, Mohandas Gandhi, Martin Luther King, the Dali Lama and Pope Francis. In their ranks as well are Karl Marx, Rosa Luxemburg, Noam Chomsky, and Howard Zinn, abolitionists like Sojourner Truth, and women suffragists like Elizabeth Cady Stanton. These are the serious and absolutely profound traditions in which Marianne Williamson stands.

It's no wonder, then, that she has all those millions of followers already mobilized on her behalf.

Related Topic(s): Buddha; FDR; Gandhi; Jesus; Marianne Williamson; Peace; Politics; Populism; SOUL; Spiritual; (more...) Trump, Add Tags  (less...)
Add to My Group(s)
Go To Commenting
The views expressed herein are the sole responsibility of the author and do not necessarily reflect those of this website or its editors.