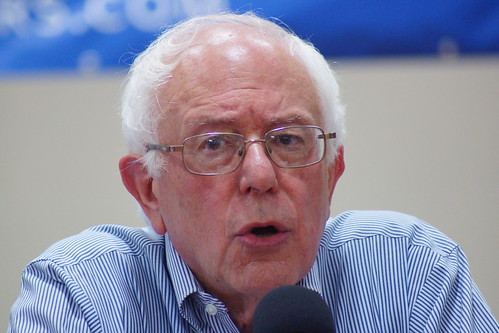 The last Democratic primary -- the District of Columbia -- took place on Tuesday. Bernie Sanders met with Hillary Clinton that night. He announced he would address his supporters online on Thursday. The chattering class is abuzz with speculation on what Bernie will do. Commentators are lathered up about whether and when he will endorse Clinton, whether he'll work to elect her, and whether he'll "fold his followers" behind Clinton.

The hand-wringing and rumor-mongering are pure melodrama. Sanders has already made it clear -- repeatedly -- what he will do. The real question is not about what Bernie will do, but about what Clinton will do. Here's what Bernie has told us he will do:

No doubt, Sanders will challenge Clinton to commit to run a campaign championing bold progressive reform. He'll urge her to speak forcefully against big money in politics and to push hard for an aggressive agenda to make this economy work for working people. He'd be wise to seek commitments about ending the Wall Street-to-Washington revolving door. He'll push her to name a progressive champion as vice president.

The question is what Clinton will do. Will she run a campaign of experience against Donald Trump's idiocy, seeking to capture the center while sacrificing any mandate for bold reform? Will she embrace the need to become a candidate of change rather than continuity?

The question is what Clinton and Democrats on the platform committee and in the convention will do. Will they embrace the Sanders agenda -- that probably enjoys majority support from the delegates were they free to vote their personal preference? Will they seek to avoid clear commitments -- on the $15 minimum wage, the banks, the trade deal, college costs and debts -- substituting gauzy language about goals for clear platform pledges?

No doubt, Sanders will seek to change the rules of the Democratic Party, forcing it to decide, as he put it, whether it will "open its doors and welcome into the party people who are prepared to fight for real economic and social change" or choose to "maintain its status quo, remain dependent on big money ... with limited participation and limited energy." He should seek the resignation of the utterly compromised Democratic National Committee Chair Debbie Wasserman Schultz. He'll seek to end voting by superdelegates, to open primaries, to ease voting rather than make it difficult. He's likely to push to ban super PACs and secret money in Democratic primaries and more.

The question is what Clinton will do. Will she want her convention to be opened by Wasserman Schultz and greeted by mass booing by the assembled delegates? Will she embrace reform or defend the rules on money and superdelegates that helped consolidate her victory?

4. Rally the Nation Against Trump

No doubt, Sanders will speak to the nation in prime time during the convention. He will use that occasion to repeat his call for a political revolution to transform our rigged economy and corrupted politics, while arguing that defeating the threat posed by Donald Trump is necessary to that cause.

The question is what the Clinton campaign will do. Will they seek to control the content of Sanders' remarks? Will they try to get him to drop his own agenda and simply focus on Trump? Will they push him to paint Clinton as a progressive reformer, rather than someone who deserves support in the cause of stopping Trump?

5. Rally His Supporters Against Trump

Related Topic(s): Bernie Sanders; Democratic; Election; Revolution; Supporters, Add Tags
Add to My Group(s)
Go To Commenting
The views expressed herein are the sole responsibility of the author and do not necessarily reflect those of this website or its editors.