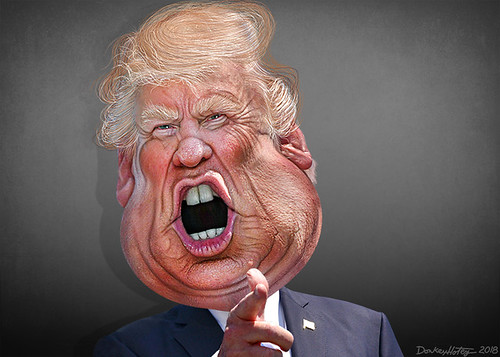 As the political season heats up, Trump is ramping up his lies through his three amplifiers: Fox News, rallies, and Twitter.

According to The Fact Checker's database, the average daily rate of Trump's false or misleading claims is climbing.

The problem isn't just the number or flagrancy of the lies -- for example, that Putin and the Russians didn't intervene in the 2016 election on behalf of Trump, or that the Mueller investigation is part of a Democratic plot to remove him.

And it's not just that the lies are about big, important public issues -- for example, that immigrants commit more crimes than native-born Americans, or trade wars are harmless.

The biggest problem is his lies aren't subject to the filters traditionally applied to presidential statements -- a skeptical press, experts who debunk falsehoods, and respected politicians who publicly disagree.

The word "media" comes from the term "intermediate" -- that is, to come between someone who makes the news and the public who receives it.

But Trump doesn't hold press conferences. He doesn't meet in public with anyone who disagrees with him. He denigrates the mainstream press. And he shuns experts.

Instead, his lies go out to tens of millions of Americans every day unmediated.

TV and radio networks simply rebroadcast his rallies, or portions of them.

At his most recent rally in Great Falls, Montana, Trump made 98 factual statements. According to the Washington Post's fact checkers, 76 percent of them were false, misleading or unsupported by evidence.

For example, Trump claimed that "winning the Electoral College is very tough for a Republican, much tougher than the so-called 'popular vote,' where people vote four times, you know."

The claim ricocheted across the country even though countless studies have shown that Trump's claims of widespread voter fraud and abuse are simply not borne out by the facts.

Meanwhile, over 50 million Americans receive his daily tweets, which are also brimming with lies.

Recently, for example, Trump tweeted that Democrats were responsible for his administration's policy of separating migrant families at the border (they weren't), and that "crime in Germany is way up" because of migration (in fact, it's down).

Related Topic(s): Donald Trump Lies; Election; Trump Ego; Trump Liar; Trump Threats, Add Tags
Add to My Group(s)
Go To Commenting
The views expressed herein are the sole responsibility of the author and do not necessarily reflect those of this website or its editors.