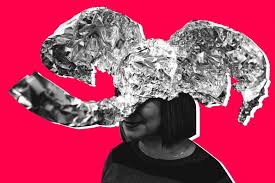 Smart upstanding citizens believe the government is your friend, and the media are its helpers.

Smart upstanding citizens believe the TV always tells the truth and the CIA exists for no reason.

Crazy, stupid conspiracy theorists believe that extreme government secrecy makes it necessary to discuss possible theories about what might be going on behind that veil of opacity.

Smart upstanding citizens believe that just because a world-dominating government with the most powerful military in the history of civilization has no transparency and zero accountability to the public, that doesn't mean you've got to get all paranoid about it.

Crazy, stupid conspiracy theorists believe it's okay to ask questions about important events that happen in the world, even if their government tells them they shouldn't.

Smart upstanding citizens believe everything they need to know about reality comes out of Mike Pompeo's angelic mouth.

Smart upstanding citizens believe billionaires always conduct themselves with the same values that got them their billions in the first place: honesty, morality, and generosity.

Crazy, stupid conspiracy theorists believe it's important to remember the lies that led up to the invasion of Iraq, and the disastrous consequences of blind faith in government claims.

Smart upstanding citizens believe "Iraq" is a fictional land similar to Narnia or Middle Earth, from the writings of a fantasy author named George Galloway.

Crazy, stupid conspiracy theorists believe Syria is fighting to avoid becoming another Libya in a war of defense against extremist proxy armies of the US-centralized empire, who were given billions of dollars in military support with the goal of toppling Damascus.

Related Topic(s): Citizens; Citizenship US; Conspiracy; Crazy Politics; Facts; Media; Propaganda, Add Tags
Add to My Group(s)
Go To Commenting
The views expressed herein are the sole responsibility of the author and do not necessarily reflect those of this website or its editors.