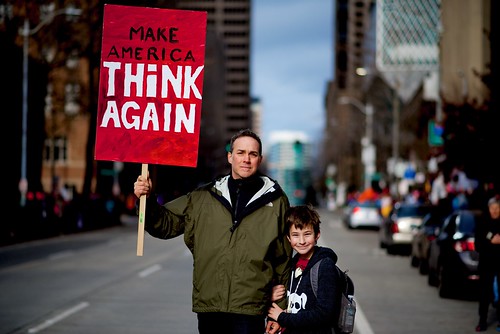 To let you know, my husband (retired Special Ops Sgt. Major) and I are 100% against raising the defense budget.

If you think throwing billions of dollars more into the military, which has not 'won' a war since WWII, is going to change everything, you're actually right.

Wars will continue and the hatred for American Imperialism will grow.

Bush didn't fund his illegal wars and we have a horrible national debt that just keeps growing in the wake of that and our ongoing aggression.

Cutting taxes on the wealthy and corporations is insanity. In the '50s, when Eisenhower was President and our economy was in good shape, the top tax rate was over 90%... and the wealthy were still wealthy.

Do you want to save money and make America great again for real? Make peace our priority and do everything possible to bring that to fruition.

Of all the 'monstrous' regimes the US attacks, Israel, which we don't attack, is the worst and yet we give them billions of dollars.

The poor among us should not be demonized. This country has produced them... with job out-sourcing and low wages. I am retired, but am an RN and a math teacher. I chose to work in education to this day because I'm good at it and believe our population should be better educated... and no, I don't believe that will come with privatization of education. I am paid $12/hr to sub and volunteer four evenings each week to tutor.

I was born in 1948 and believe the two professions I am in are among the noblest. That said, during my working years, neither were well paid. Twice, in my entire career, I made $42k. And the ugly part was that one of those years I was working as an RN for an insurance company to review disability claims to 'get people off'. In one and a half years, I found one 'cheater', if you will... a manager making $140,000/yr. My first year teaching in 1988, as a single mother of two, I made $19,001. The work I do comes from my heart, not from greed and my work ethic, in both fields, was, and is, above reproach.

I cannot say that about most of the well-paid people in government who do not represent the people, but are, instead, 'bought' with corporate money for their re-election campaigns and votes in their favor. "Democracy' at its lamest.

If this country continues warring ways in pursuing American hegemony, requiring obscene amounts of money, our future will continue a downward spiral, and we will have reaped what we have sown.

To the ruling elite, it's all about money. And one of the most profound biblical truths is "the love of money is the root of all evil". The US today is the Poster Child of that quote. That's got to change.

What goes around, comes around... the best reason I can see for pursuing peace, and hence, making America Great Again.

RN, math teacher, progressive, anti-war, political junkie, have lived in Germany and China, believe we're all equal members of one human family, disgusted with the US government
Related Topic(s): Military; Money; Peace; Peace, Add Tags
Add to My Group(s)
Go To Commenting
The views expressed herein are the sole responsibility of the author and do not necessarily reflect those of this website or its editors.

There's Nothing Like Two Glasses of Wine to make you Regret the Night Before..or maybe not.

California's Cash Cow Prison System and the Money-Sucking Death Penalty that fixes nothing.

What Trump can do to "Make America Great Again"

The Value of History Depends on What You Learn From It...if one even bothers.