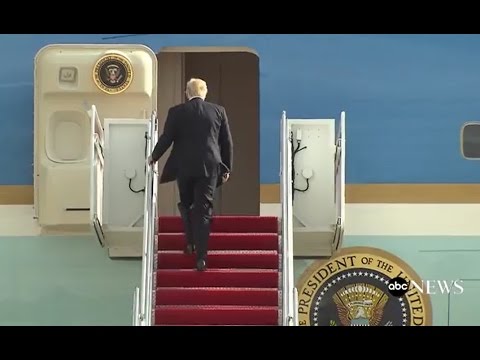 President Trump on Air Force One.
(Image by You Tube)   Details   DMCA

Did you know that we are in a national emergency right now? Seriously. We really are. At least that's what our president, who's averaging almost two golf outings a week and hops around his luxury clubs about once every five days, is telling us. I suppose if I were to look out the window I might see hints of it. Brown skins invading Palm Coast's P Section. Oh no, wait, that's just my son mowing the lawn.

I can think of a few emergencies right now: the health care crisis still making insurance a costly gamble for millions, the opioid crisis taking the lives of 72,000 Americans in a single year, the gun epidemic that took the lives of nearly 1,200 children since the Parkland school massacre, the nation's paralysis on climate change, making slow-cooked frogs of us all.

Undocumented immigrants pouring over the border? Not exactly. Not when illegal crossings are at 40-year lows. Not when the problem, if there is a problem, is closer to a lack of immigrants to make up for the country's collapsing fertility rate. We depend on undocumented immigrants to till our soils, harvest our vegetables and fruit, care for our children, wait our tables and do all sorts of other menial work we're too good to do ourselves. Before long we'll need them to keep our population from falling. The national security threat is their absence, not their presence. And their absence has been felt.

According to the Department of Homeland Security, almost a million migrants crossed the border illegally in 2006. The number was down to 62,000 in 2016. There's been not a single terrorist incident tied to border crossings, except perhaps the terrorism inflicted on migrants by Minutemen and their mutants, those barbaric vigilantes who police the border like latter-day klansmen, or by Immigration and Customs Enforcement, the deservedly reviled federal agency known as ICE that could also pass itself off for brownshirts.

Drugs are coming in, but they're coming in from legal points of entry, not across rivers and deserts. And if they keep coming in, maybe it's time to pay attention to something Republicans love to get high on: the rule of supply and demand. Drugs are coming in because Americans are addicted to them, not because Mexicans or Clint Eastwood think being a mule is a good career move. If we legalized marijuana, the most trafficked drug at the border would become a thing of the past.

And if we spent the $5.7 billion Trump wants to waste on the wall (and the many more billions it would actually cost to build to completion) on drug treatment programs instead, maybe we could start making headway against the opioid epidemic at home and the rising captures of heroin and meth at the border. To put this in perspective, there are now a half dozen to a dozen overdoses a week in Flagler that we know of, and not a single bed for adult or adolescent males in a treatment center in the county. Not one. Replicate that dearth of services across the country, and you're closer to a national emergency than anything happening at the border.

On Monday 58 Republican and Democratic former national security officials issued a formal statement declaring that there's no factual basis for Trump's emergency. They include many who've served under every president going back to the first George Bush. There's a pretty strong bi-partisan consensus on this, itself a startling achievement these days of ideological secession. There's also evidence, and math, there's reason and, deep down in our hardened hearts, there's still a bit of Emma Lazarus, or ought to be.

We don't have to downplay strong sentiment for border controls. But those controls are in place and have been improving. The numbers prove it. Maybe they can improve further, but not at the cost of a useless wall, or through equally lynching impulses like our own Gov. Ron DeSantis's call on all local sheriffs this week to become ICE collaborators. As if anti-immigrant fevers let loose by latter-day talk-show Father Coughlins weren't enough.

We have crises on our hands, some of them damn near emergencies. We also have an American leader not only genuflecting to autocrats from Turkey to Russia to Saudi Arabia, but behaving like them. If there is a national emergency, he's it. An undocumented immigrant in comparison is a Walt Whitman poem on legs who still hears America singing, though it's getting harder to hear why.

Related Topic(s): Donald Trump; Immigrants; National Emergency, Add Tags
Add to My Group(s)
Go To Commenting
The views expressed herein are the sole responsibility of the author and do not necessarily reflect those of this website or its editors.