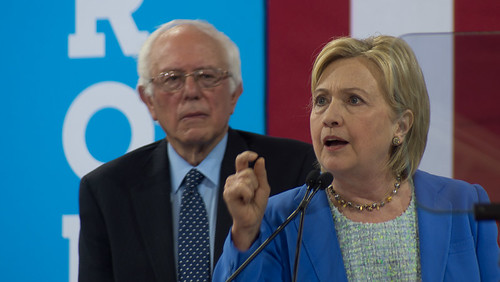 Remember when Bill Clinton used this Fleetwood Mac nugget as a theme in his 1992 campaign? Today, as Hillary Clinton's campaign memoir goes on sale, the Democratic Party Clinton and his fellow "centrists" remade in their image seems unable to stop thinking about yesterday.

Can the Democratic Party truly reject its past mistakes and look to the future?

The past shouldn't be off limits, of course. We're supposed to learn from our mistakes. Nevertheless, Democratic Party operative Paul Begala tweeted, "New rule: Nobody is allowed to comment on Hillary's book until... they have read the book."

Why does it seem like Democratic insiders are always trying to police the discourse? Politics is public property. People can talk about whatever they want. Still, when it comes to political debate, it's wise to actually follow Fleetwood Mac's advice, and not just hum along:

So, are the controversies Hillary Clinton's campaign memoir stirs up useful, or a waste of time?

It cuts both ways. Clinton says she's done running for political office. If that's true, it's unproductive to argue about her personal merits. But her contentious and inaccurate statements in published excerpts from the memoir seem designed to influence the future of the party.

If she seeks influence, these statements should be challenged, in a forward-looking way.

Begala's comment was a response to Twitter comments by MSNBC host Chris Hayes, who called the book "compelling and candid and written with a pretty remarkable intimacy" and said that "the 'juicy' newsy tidbits give the impression it's some kind score-settling rant, which it is not."

Calling the book "compelling," "candid" and "intimate" is not the same as saying it is "reflective," "courageous," "brave," or "insightful."

The excerpts already released have given us some stark statements -- for example, that Clinton disappointed her campaign didn't channel the kind of energy and enthusiasm that the Women's March engendered, and that she blames both Bernie Sanders and his followers for contributing to her defeat.

These aren't just personal beefs. They speak to the future of the progressive movement. That means they deserve a response.

"I couldn't help but ask," Clinton reportedly writes of the Women's March, "where those feelings of solidarity, outrage, and passion had been during the election." That question should inspire some self-reflection on her part. The Democratic Party's leaders need to ask itself how a spontaneously organized demonstration generated worldwide enthusiasm and support, even as their party continues to decline at all electoral levels.

Republican cheating has a lot to do with it. So does the corrupting effect of money in politics, which elevates Republicans while weakening Democrats -- perhaps most of all when they are its recipients.

Related Topic(s): Bernie Sanders; Democratic; Funding; Hillary Clinton; Politics, Add Tags
Add to My Group(s)
Go To Commenting
The views expressed herein are the sole responsibility of the author and do not necessarily reflect those of this website or its editors.