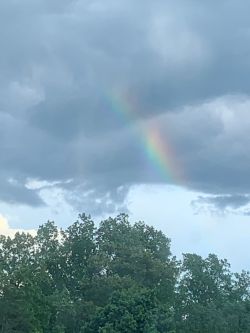 America Needs to Become Rainbow in Dark Clouds
(Image by Marcello Rollando)   Details   DMCA
How we perceive the global COVID-19/SARS-2 pandemic and its, if you can't beat them join them, political Hail Mary marketing reversal, Operation Warp Speed, for mis-administrating shots of vaccines, and its fast-forwarded race against presidential arrogance, media manipulation - indeed, time itself - exposes, beyond imbedded historical fears, to our broader, centuries old, slight-of-hand grasp of, self-truth.

History most easily repeats itself, most efficiently, the very moment, we the easily impressionable people, fail to follow the line of succession from LBJ's Gulf of Tonkin lie and Nixon's Watergate break-in impeachable offenses - through fantastical overdoses of Trickle Down, Welfare Queen, Government is the Problem misleading campaign slogans, to McConnell's Bork revenge against Democrats, particularly all Obama and Biden presidential public policies to reconnect Americans to, United We Stand.

However, the intentional discordant bridge from Nixon to 6 January 2021 didn't culminate with sore loser Moscow Mitch, nor the wildly, yet tiny swinging pendulum of Lindsay Graham, or the foxy anti we hold these truths to be self-evident tag team of Carlson & Hannity, continually enabling clones like Nunez and Marjorie Taylor Greene to spawn the infection of America's infamous tragedy: Americans replaying near suicidal short-sightedness - killing our own young with our blind faith in the profiteering chicanery of corporate sponsored war mongers.

We really had to be exceptionally mesmerized by the Mushroom Cloud Con of Bush/Cheney/Rumsfeld/Wolfowitz to accept forever oil wars in which the Watson Institute reports, between 480,000 and 507,000 people have been killed in the United States' post-9/11 wars in Iraq, Afghanistan, and Pakistan - before all we like sheep, could willingly prostrate ourselves as welcome mats to the Big Lie of our 45th.

The destruction of our democracy needed every shouting attendee at Trump rallies from Tuesday 19 January 2016 to every 2021 attacker on our nation's Capitol Building and all Democrats, Republicans and Independents therein.

While by far, the tightest grip on the champion of death tolls' trophy belongs to global pandemics standing astride the bodies of so many who could have been spared but for the lack of competent and caring leadership - coming in second for the selfish negligence award, are those whose chosen Mission is to convince Americans that patriotism best honors American values by being manipulated, duped and ultimately sacrificed by one's elected leaders.

We need now internalize forever: such a definition of patriotism is, a false positive, perpetuated by those who's sons and daughters are rarely sent into harm's way.

So, when evaluating communications and communicators, election choices or revising our opinions about Conservatism or those who've most recently gone sour on, The Big Lie, Conservative Republicans in Congress and many State Legislatures have decided to vote, the end justifies the means divine obedience, to regain and maintain political power at the expense of Americans, and our electoral process.

It's time we reevaluate, reconsider and remember:

Not all presidents fit the mold of Washington, FDR or John Kennedy

There are more Thurgood Marshalls & RBG's on the Supreme bench of democracy than there are Thomas and Kavanaugh Duos.

Too many unknown Americans suffer, go hungry, even die every day to maintain the cash flow for elected officials long on promissory notes with little intention of delivering on anything, save using our taxes to fuel their rise up the ladder of self-aggrandizement.

The International Criminal Court still considers senior members of the Bush/Cheney Administration, War Criminals: there were no Weapons of Mass Destruction; no threatening Axis of Evil until world stage elevated by Bush/Cheney and Trump/Pence

Remembering American WWII Internment Camps for Japanese Americans, or Nazi like Tuskegee syphilis testing on American citizens of color, can, understandably harbor a lack of trust for the old white fathers maintaining a chokehold on power.

Currently the legacy of Edward R. Murrow, Walter Cronkite and Huntley and Brinkly has been tarnished by conjecture, shamed by hyperbolic distractions and mocked by poor attempts at variety show entertainment, minus the variety, with too much news sacrificed to fleeting TV soundbites between too much corporate marketing.