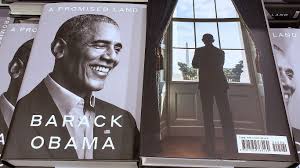 I've just finished Barack Obama's remarkable autobiography, A Promised Land. Its biblical title invites reflection about the theological orientation and resulting policies of the man the book portrays. By his own testimony, that direction was originally set by Jeremiah A. Wright, Mr. Obama's former pastor at Trinity United Church of Christ on Chicago's South Side.

With all of that in mind, the point of the following review of The Promised Land will be that had Mr. Obama employed what he learned at the feet of Jeremiah Wright, his policies would have been markedly different from their actual forms. Practically speaking, they would have more resembled those of Franklin Delano Roosevelt than a continuation of the neoliberal legacy of Bill Clinton. They would have set the country on a profoundly different and more widely beneficial trajectory from the one we are currently following.

Professed devout Catholic, Joe Biden, should take note. The radical biblical tradition espoused not only by Wright and Cone, but by King and William Barber - i.e., championed by thought leaders among Mr. Biden's most crucial constituents - won't support a return to "normalcy." It requires policies that prioritize the needs not of Wall Street, but of the poor. It demands departure from Barack Obama's business as usual.

And that brings me precisely to liberation theology.

In case you've forgotten, liberation theology is reflection on the following of Yeshua the Christ from the viewpoint of the poor and oppressed committed to improving their collective life economically, politically, socially, and spiritually.

Its Judeo-Christian orientation is about political and economic starting points and end points.

Sociologically speaking, it begins (as OpEdNews' Rob Kall would say) from the "bottom up." In the case of the Jewish tradition, it starts with the liberation of slaves in Egypt by a Life-Force they called "Yahweh." It ends with Yahweh's pledge to give the enslaved (as Mr. Obama's book title reminds us) "A Promised Land."

In its Christian form, the tradition starts with a poor houseless child who grows into a prophet. He promises dispossessed victims of the Roman Empire the end point of "the kingdom of God." By this he meant a world where God is king instead of Caesar - a world with room for everyone. For liberation theology, that's the North Star - the guiding vision meant to shape all of life, economically, politically, socially, and spiritually - a world where no one is excluded or marginalized

Unfortunately, the policies, Mr. Obama describes in A Promised Land ended up reflecting the former over the latter.

That reflection contrasts dramatically with what scandalized America's right wing when it first encountered Jeremiah Wright's liberation theology. The discovery occurred soon after they realized that Barack and Michelle Obama not only were parishioners of a fiercely radical black pastor, but that he had officiated at their wedding (A Promised Land 23).