He's right that Trump is unfit to be president. He's wrong about the solution to that problem. 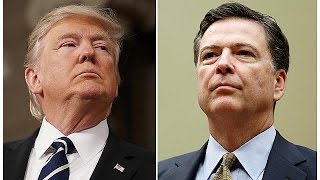 At the core of the generally impressive prime-time interview thatGeorge Stephanopoulos conducted with James Comey was a necessary question about the FBI director's much-anticipated memoir: A Higher Loyalty: Truth, Lies, and Leadership. "You write that President Trump is unethical, untethered to the truth," noted the ABC newsman. "Is Donald Trump unfit to be president?"

Comey's reply was blunt and damning.

"Yes," said the veteran federal law-enforcement officer, who last year was removed from the leadership of the Federal Bureau of Investigation by Trump. "But not in the way...I often hear people talk about it. I don't buy this stuff about him being mentally incompetent or early stages of dementia. He strikes me as a person of above-average intelligence who's tracking conversations and knows what's going on. I don't think he's medically unfit to be president. I think he's morally unfit to be president."

Comey did not stop there. He went into detail.

"A person who sees moral equivalence in Charlottesville, who talks about and treats women like they're pieces of meat, who lies constantly about matters big and small and insists the American people believe it, that person's not fit to be president of the United States, on moral grounds," said the former US Attorney for the Southern District of New York and deputy attorney general of the United States. "And that's not a policy statement. Again, I don't care what your views are on guns or immigration or taxes," said Comey. "There's something more important than that that should unite all of us, and that is our president must embody respect and adhere to the values that are at the core of this country. The most important being truth. This president is not able to do that. He is morally unfit to be president."

Related Topic(s): Donald Trump Versus The Constitution; Impeachment; James Comey; Trump Illegality; Unfit, Add Tags
Add to My Group(s)
Go To Commenting
The views expressed herein are the sole responsibility of the author and do not necessarily reflect those of this website or its editors.