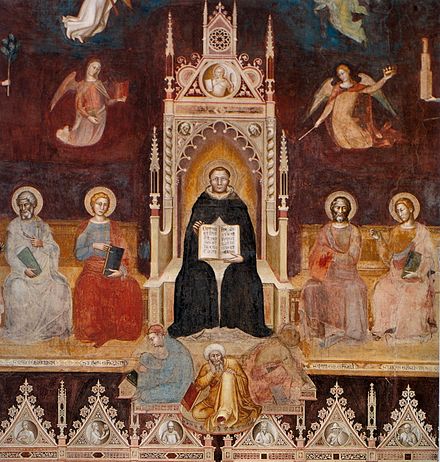 Duluth, Minnesota (OpEdNews) May 24, 2020: Most OEN readers know about greed. In the medieval tradition of thought about the seven deadly sins, greed (also known as avarice and covetousness) is one of the deadly sins (also known as the capital vices).

Here is the relevant exchange:

AQUINAS: "'The greed for gain knows no limit and tends to infinity.'"

FOX: "It is almost as if material goods tap into our divinity, which is our capacity for spirit or the infinite. One more reason for developing a theology of our divinity, for if we do not have one, then all people are set up to be infinitely voracious consumers" - and greed-obsessed capitalists.

For the record, the non-Catholics Robert Maynard Hutchins (1899-1977) and Mortimer J. Adler (1902-2001) of the University of Chicago included Aquinas' Summa theologiae in the 1952 edition of the Great Books of the Western World.

Now, as Fox knew, Aquinas developed a theology of our divinity. See the following scholarly studies:

(2) Bernhard Blankenhorn's 2015 book The Mystery of Union with God: Dionysian Mysticism in Albert the Great and Thomas Aquinas;

Just to be clear here, theology as such is not the effective antidote to greed. The effective antidote to greed is cultivating one's inner life of participation in divine life - and as a result, living virtuously with help of divine grace. According to Aquinas, the four cardinal virtues involved in living virtuously are (1) moderation (also known as temperance), (2) fortitude (also known as courage), (3) prudence, and (4) justice.

On page 338, Fox quotes Aquinas as saying, "'We are made virtuous by means of laws.'"

Related Topic(s): Grace; Greed; Spirit; Spirituality; Spirituality; Theology, Add Tags
Add to My Group(s)
Go To Commenting
The views expressed herein are the sole responsibility of the author and do not necessarily reflect those of this website or its editors.