"I move that we continue suspended committees."
- LAUSD Board Member Monica Garcia

While parents in Los Angeles scored a big victory last week with the resurrection of the Special Education Committee, the future of the Parent Engagement Committee is less certain. According to a source within the district, an agreement was secured to allow Board Member Scott Schmerelson to resume chairing meetings of these two committees on alternating months. This seemed to be confirmed when a Special Education Committee meeting was placed on the board's calendar last week. However, after reviewing the video from last Tuesday's board meeting, it appears that the resumption of the Parent Engagement Committee is now less certain.

During the meeting, Board President Kelly Gonez confirmed that she had the intention of allowing "the chairs of the previous committees to resume their committees maybe until the start of the next school year." Later she reiterated that she wanted to allow all committees to restart this spring, "at the discretion of chairs." However, this was opposed by her allies on the board, led by Monica Garcia.

Garcia's arguments for maintaining the suspension of the committees centered on temporary conditions like staff needing to spend time focusing on the reopening of campuses and the board's ongoing effort to set goals. She conveniently skipped over the fact that she has long opposed the convening of committees. During Garcia's past terms as board president, she also refused to seat committees. Interacting with the public is not necessary when one is relying on money from the charter school industry to keep one in office. 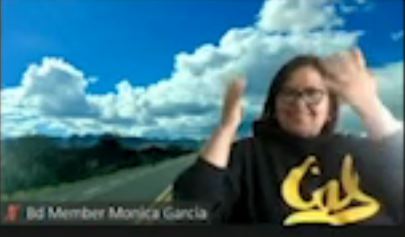 The longest-serving member of the board also complained that under California's Brown Act, only three board members can participate in each committee so that a quorum of the full board is not reached. This can be solved by alternating the membership of the committees so that more board members can be involved in ongoing sessions. Additionally, live feeds of these meetings and archived videos are available so that board members who are not allowed to be present can review the information presented even if they cannot participate in the discussions. Unless the full board is willing to commit to participating in meetings for each of the subjects covered by the committees, the discussions held by these meetings cannot be replicated in regular board meetings.

Schmerelson was incredulous that any of his fellow board members opposed the resurrection of the committees that he chairs. He noted that participation is voluntary and if he is willing to do the work necessary to make these meetings successful, then anyone who does not want to participate should just stay out of the way. Schmerelson also emphasized that parents had made it clear to him that they wanted both the Parent Engagement and Special Education Committees to begin operating. This was a view confirmed by Nick Melvoin, even as this board member worked really hard not to take any meaningful public position during the debate.

Schmerelson expressed concern that Gonez would backtrack on the decision to allow the Special Education Committee to meet on Thursday. However, she assured him that this meeting will be allowed to go forward as planned.

As president of the board, Gonez had the ability to implement her original plan to restart the committees without the rest of the board's approval. Unfortunately, she seems to not want to cross her allies on the board. With the exception of the Special Education Committee, all committees, including Parent Engagement, are again on hold as the board continues to debate future actions.

This lack of leadership may come back to haunt Gonez as she seeks reelection next year. It is bad enough that none of the board members have a child who attends an LAUSD public school. Silencing the input of parents through the continued shutdown of the Parent Engagement Committee is just going to make the case stronger that being an LAUSD parent is an important qualification for being on the board.