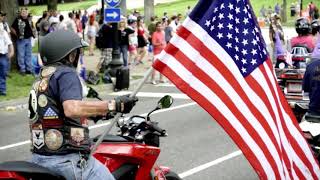 One of the first people to come see me in Washington after I got elected to the Senate -- back before we had a real office and were working out of a clunky trailer -- was a Boston locksmith named Joe.

At the time, Joe was the president of the Massachusetts Chapter 1 of Rolling Thunder, an organization dedicated to fully accounting for American prisoners of war and servicemembers who are still missing in action. He came to my office that day because he had one goal: to honor their sacrifices.

Joe laid out his plan for me, and his passion lit up our little trailer. He wanted to place an honorary chair on the grounds of the U.S. Capitol. The chair would remain empty, a constant reminder of America's prisoners of war and service members who remain missing.

These chairs were already showing up in unexpected places. You'll find one at the Massachusetts State House, Gillette Stadium, the TD Garden and Fenway Park. Similar POW/MIA chairs can be found at arenas, theaters and government buildings across the country. But not on Capitol Hill.

So that day, I promised Joe that we were going to fight to get it done. I worked with Senator Marco Rubio to introduce a bill to establish a POW/MIA Chair of Honor on the U.S. Capitol grounds. Yes, believe or not, this was truly a bipartisan effort -- when Democrats and Republicans work together, we can still get things done.

Our bill received powerful support from Rolling Thunder National, the National League of POW/MIA Families, and the National Alliance of Families for the Return of America's Missing Servicemen. We couldn't have won without their voices speaking out and fighting for it.

And last year, that bill Joe came to see me about became law.

On Wednesday, leaders from both parties (including Mitch McConnell and Paul Ryan) came together and held a beautiful ceremony unveiling the commemorative chair in the Capitol's Emancipation Hall. Joe wasn't able to make the trip -- but his Rolling Thunder friends rode down from Massachusetts to see Joe's vision come to life.

Veterans Day has always been an important day in my family. All three of my big brothers served in the military. I remember my mother running back from the mailbox with a note from David, who trained as an emergency medic at Fort Sam Houston -- or John, who did a tour in North Africa. And she held her breath for word from Don Reed, who completed 288 combat missions in Vietnam.

The letters kept coming home, and my brothers came home too. But the heartbreaking reality is that many families aren't so lucky. Today, there are tens of thousands of service members still missing in action, many from World War II, and more than 1,600 from the Vietnam War. They haven't returned home to us, but they will never be forgotten.

This Veterans Day, as we honor all those who have served our country, I hope you'll join me in pausing to remember those who have yet to return home from past wars, and the families who still check the mail everyday. We owe them a debt that can never be repaid.

Thanks for being a part of this...

Related Topic(s): Bipartisan; Military; Veterans Day; Veterans Memorials, Add Tags
Add to My Group(s)
Go To Commenting
The views expressed herein are the sole responsibility of the author and do not necessarily reflect those of this website or its editors.