What has happened to our Moral Character? 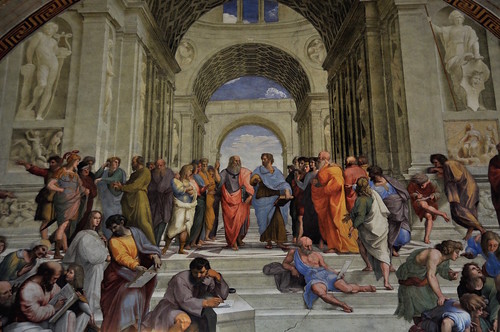 The School of Athens ~ Raphael

As I watch the news, I find myself looking for stories about people's character. How they are responding to the global crisis.

I'm in the middle of a dialogue with an army friend about the Navy commander, Capt. Brett Crozier, who was relieved of his command because he went outside the chain of command to write a letter to the Navy leadership about his men and the coronavirus crisis aboard his ship. To me, that indicates this captain has a strong moral character, because he went against the rules to save his men. To me, he sacrificed something of his life for his men and that makes him a hero to me.

Having the courage to do what's right, even when it will get you into trouble; using your gifts and strengths to help others; standing up to lies and hypocrisy. These are all gifts of moral character. And having a strong character is part of our soul growth, isn't it? We also have to learn kindness and compassion, responsibility and endurance and many other virtues that we no longer name as important to life when we incarnate each lifetime. When we resonant at these high levels of character, we can change the world.

I believe that our work each lifetime is to build our character. To learn not only how to be human, but to become a conscious human being who has the right and privilege to co-create the world with Source.

As I notice which movies and shows come out each month on Netflix and Amazon, there are very few which teach us how to develop that moral character. I love THIS IS US for that very reason. It's all about a father's struggle to build character in himself and in his children. And a mother's need to love and protect her children.

And of course there is my favorite moral mentor, Captain Jean-Luc Picard. In the finale of the new series PICARD, Jean-Luc says something that is so important for all of us, but most especially for fathers. When he's asked how he's going to get through to a character who is making a bad choice, he say: By example! By her seeing my actions and then making her own choice.

That's the best example of what builds character to live it, to own it --- whether it's honor or mercy or freedom of choice. And to pass it on by example. And that's the ancient archetypal purpose of The Father. We don't need to be a father to do this, but that's the archetypal energy behind being an example of moral character.

To be an example of a responsible human being. There can be laughter and joy, fun and playfulness as well. But our work is to build into our character the very best of human nature. Loyalty. Honesty. Honor. Respect. Service. Leadership. These are qualities of the Divine Masculine, in both men and women.

Our work is to develop as much of the goodness of the universe as our hearts can hold.

Related Topic(s): Change; Character And Values; Choice; Compassion; Courage; Father; Kindness; Lies; Loyalty; Morality Morals; (more...) Mothers; Responsibility; SOUL, Add Tags  (less...)
Add to My Group(s)
Go To Commenting
The views expressed herein are the sole responsibility of the author and do not necessarily reflect those of this website or its editors.