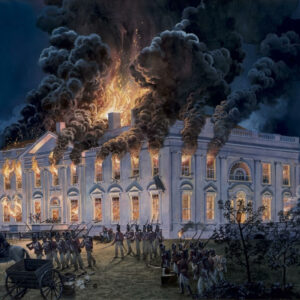 Six-years after the British landing at Jamestown, with the settlers struggling to survive and hardly managing to get their own local genocide underway, these new Virginians hired mercenaries to attack Acadia and (fail to) drive the French out of what they considered their continent.

The colonies that would become the United States decided to take over Canada in 1690 (and failed, again).

General Braddock and Colonel Washington tried again in 1755 (and still failed, except in the ethnic cleansing perpetrated and the driving out of the Acadians and the Native Americans).

The British and U.S. attacked in 1758 and took away a Canadian fort, renamed it Pittsburgh, and eventually built a giant stadium across the river dedicated to the glorification of ketchup.

An early draft of the U.S. Constitution provided for the inclusion of Canada, despite Canada's lack of interest in being included.

Benjamin Franklin asked the British to hand Canada over during negotiations for the Treaty of Paris in 1783. Just imagine what that might have done for Canadian healthcare and gun laws! Or don't imagine it. Britain did hand over Michigan, Wisconsin, Illinois, Ohio, and Indiana. (At least they know they're free!)

In 1812 the U.S. proposed to march into Canada and be welcomed as liberators. They weren't. But the Canadians didn't burn the White House. That was done by British troops that included men recently escaped from U.S. slavery. Killing some of those escapees is celebrated in the U.S. National Anthem, as is the fact that during a battle in which people died, a flag survived.

Who remembers this song?

Secession first he would put down
Wholly and forever,
And afterwards from Britain's crown
He Canada would sever.
Yankee Doodle, keep it up,
Yankee Doodle dandy.
Mind the music and the step
and with the girls be handy!

Canada has a heck of a lot to answer for, including having served as sanctuary for people fleeing slavery or conscription into evil wars, not to mention providing handy evidence cited in millions of futile debates against U.S. proponents of the impossibility of providing healthcare or banning guns or achieving freedom without a bloody war or ending slavery without a bloody war or being truly happy without a lot of bloody wars. Then there's that whole banning land mines thing; what was that about?

In defense of Canada, however, it should be noted that Canadian companies deal weapons around the world, Canada buys U.S. weapons, Canada spends $20 billion a year preparing for wars, Canada is a member of NATO in good standing, Canada has not joined the new treaty banning nuclear weapons, Canada's cruelty to its indigenous nations knows no end, Canada's rapacious extraction of fossil fuels knows few rivals, and Canada is a disastrous promoter of the myths of humanitarian war and the so-called responsibility to protect (by bombing). So, there's hope yet for such northerners, and if Canada fails to find its way as part of the global epidemic of organized violence, I imagine the United States would be happy to invade.

David Swanson is the author of "When the World Outlawed War," "War Is A Lie" and "Daybreak: Undoing the Imperial Presidency and Forming a More Perfect Union." He blogs at http://davidswanson.org and http://warisacrime.org and works for the online (more...)
Related Topic(s): Canadian Charter Of Rights; Canadian Govt-Politics; Canadian Parliament House Of Commons And Senate, Add Tags
Add to My Group(s)
Go To Commenting
The views expressed herein are the sole responsibility of the author and do not necessarily reflect those of this website or its editors.