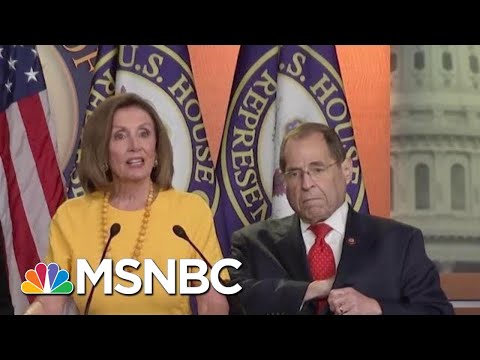 If the purpose of the current Trump impeachment hearings were simply to fulfill Congress Members' oaths of office and do their jobs, it would be difficult to explain the past many years. Jerrold Nadler, Chair of the Judiciary Committee for the past 11 months, has known since inauguration day that Trump was in egregious violation of the emoluments clauses, and has since declared other Trump actions impeachable without moving to impeach him. Impeachable offenses by Trump, Obama, Bush, and on back have been ignored on an epidemic scale by Nancy Pelosi and hundreds of her colleagues. Public polls and public demand (as well as the count of indisputable substantive grounds) for the impeachment of Bush and Cheney were about as high as for Trump and that was in the absence of media support or Congressional action. Numerous illegal wars are opposed by almost the entire U.S. public, and the House makes a halfhearted pretense of trying to end a single one of them every few years or so.

If the purpose were to remove Trump from office, the House would have long since impeached him for numerous abuses that are beyond dispute, things like the emoluments violations, incitement of violence, interference with voting rights, discrimination on the basis of religion, illegal wars and threats of wars, abuses of the pardon power, obstruction of justice, politicization of prosecutions, drone murders, support of coup attempts in Venezuela and Bolivia, intentional exacerbation of climate collapse, collusion with Israel against the United States, separation of children from families, tax fraud, repression of freedom of the press, unconstitutional declarations of emergencies, etc.

Some of these charges could include double-headers adding in the impeachment of Mike Pence and his removal. But there is no evidence that the Democratic "leadership" wants to see anyone removed from office. As the Chairman of the Judiciary Committee in 2007, John Conyers, made clear, nothing takes priority over the next election, and the strategy for winning the next election is always to keep quiet, avoid being seen, and hope people vote against the other guy.

Which brings us to one of the actual purposes of the Trump Impeachment Follies, namely, to make Donald Trump look bad. But even this is hard to make sense of without the other two main purposes: to blame the 2016 election on Russia, and to make Joe Biden look good.

That last one seems even harder to make sense of. Why focus on Ukraine, when it opens up a can of worms about Joe Biden? Well, first of all nobody cares about the coup in Ukraine. Nobody even knows it happened. Second, the Democrats believe they can explain away any alleged wrong-doing, and that someone's son getting paid a fortune for nothing is pretty routine. Third, Democrats think that Biden's hawkish war fever directed at Russia is a good thing. And fourth, they think that people will sympathize with Joe "No Empathy for You" Biden because Trump was trying to dig up or manufacture dirt on him.

But it's blaming Russia for the last election that remains the overriding delusion driving decision making in Washington. That's why the Judiciary Committee isn't even leading the impeachment efforts. This is an impeachment hearing dressed up as a war against an evil empire. Trump is being depicted as stalling in the provision of "lethal aid" (in plain English, deadly weapons) to be used against the dark forces of the Kremlin hordes, and doing so in order to enlist foreigners who are almost like Russians against the Capitalist Christian Savior from Delaware. We're to forget that Russiagate fizzled out and to suppose that Ukrainegate has been piled onto Russiagate as additional evidence of malevolence and Russianness.

Also, the people pushing this PR campaign actually believe in it, which means that they believe it makes Trump look worse to accuse him of withholding "lethal aid" from the Ukrainian military which has practically no Nazis in it! than to accuse him of being bought and paid for by corrupt interests mostly in the United States and to be engaged in a wide range of destructive and abusive activities.

David Swanson is the author of "When the World Outlawed War," "War Is A Lie" and "Daybreak: Undoing the Imperial Presidency and Forming a More Perfect Union." He blogs at http://davidswanson.org and http://warisacrime.org and works for the online (more...)
Related Topic(s): Ukraine, Add Tags
Add to My Group(s)
Go To Commenting
The views expressed herein are the sole responsibility of the author and do not necessarily reflect those of this website or its editors.